Jarmila Janků revitalized the town of Nejdek with a glass mosaic

Jarmila Janků from Nejdek in the Karlovy Vary Region organized an event where she and friends and art students transformed an old concrete wall with a glass mosaic. Their efforts changed a previously unsightly ugly wall into a visual delight and also connected people who are interested in improving the public spaces they share.

Nejdek residents who did not take part in the event often ask: “How did you come up with the idea?”Jarmila’s answer is rooted in her past. Each of us is formed by the environment in which we grow up, and Jarmila was lucky enough to grow up in an artistic home. Back in the 1970s, when Czech society was restricted by the Communist regime, her parents retained a bit of their freedom and created their own world, which was a tremendous source of inspiration for their children. “I learned that everything is possible. My parents bought an old wooden house with a big garden on an installment plan. They still live there, creating art, letting it give them energy. My Dad built furniture for the house and my Mom sewed curtains, upholstery and so on. My Mom still weaves tapestries and my Dad paints. That is probably why my mission is to pass my love of art on to others, to children in art classes at the community art school,” says Jarmila.

She cares about public spaces in her community. She looks for special, hidden places. “I know that electricity and the sewage system, water, shopping, parking, all of that has to function in a town. That’s a lot of work for the local government. And there aren’t many resources left over for aesthetics. But fortunately, I’m not the only one who wants more than just municipal infrastructure, who wants to have a pleasant environment to live in, too.” Joining forces with other likeminded people and support from Via and local companies enabled the group to transform an unsightly wall into something that glitters like a glass river. They also adorned a wall of a historical tower, a remnant of the Nejdek castle. They created tiles and compiled them into a picture of the three most important families who had owned the city in the past, including their coats of arms. The coats of arms were created mainly by adults but the portraits were developed by students of the community art school. Jarmila guides them in unleashing their creativity and believes that the students will develop a lifelong love of making their environments beautiful places to live. 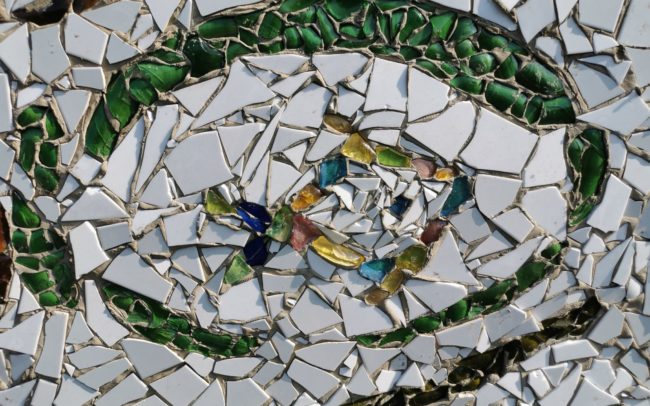