Through this year’s 20th annual Via Bona Awards, we recognized the most powerful stories of Czech giving from the last twenty years. This year’s awards were unique because the public selected the most inspiring cases of philanthropy from the award’s 20-year history through online voting. On Tuesday, May 23, 2017 Via Foundation symbolically recognized these philanthropists at a gala evening at the Prague venue “Pražské křižovatka”.

The Individual Philanthropist award went to Zdenka Wasserbauerová, who has recruited over 10,000 young people to sign up as bone marrow donors over the past 18 years, thereby saving many human lives. In the Young Philanthropist category, Milan Dzuriak, who undertakes long-distance walks and bike rides to raise money to make disabled children’s dreams come true despite his own painful illness, received the most votes.

Jan Školník and the company Hobra-Školník, both devoted to revitalizing the Broumov region through a multitude of projects, received the Philanthropy in Regions – Czech TV award. The Good Company award went to ČSOB bank for its long-standing and well-conceived support of a diverse array of charitable projects.

Over the last twenty years, Via Foundation has recognized 122 individuals and companies through the Via Bona Awards. A jury selected twenty of the most powerful cases in four categories. The public then voted for their favorites through an online voting system.

“The Via Bona Awards award winners show how far philanthropy has come in the Czech Republic since the Velvet Revolution. Twenty years ago people and companies were just discovering what philanthropy means and entails, and today we are much farther. Both corporate and individual philanthropists help others through well-conceived, long-term strategic giving and even teenagers are involved in fantastic philanthropy projects,” says Jan Gregor, program director at Via Foundation. “This year’s Via Bona Awards symbolically celebrate the development of philanthropy in the CR.”

The positive evolution in giving in the CR is most visible in numbers. Last year’s tax returns show that Czech companies were 4.58 times more generous than in 2000. In 2015, they gave a total of $143,140,922 (3.41 billion Czech crowns). The volume and number of individual donors also grew – more than HDP growth, in fact. The average per capita gift in the CR is $7, according to tax returns. Online giving is also growing significantly – last year Czechs gave over $1,175,350 (28 million CZK) through the Darujme.cz online giving portal, which is a 33% year-on-year increase. Available data shows that forms of giving that are relatively new to the CR, such as bequeaths, are also on the rise.

The Via Bona Awards are held each year under the auspices of the US Embassy in the Czech Republic. The 2017 general partner is the Avast Foundation, the main partner is Česká spořitelna bank and the main media partner is Czech TV.

“Three years ago we received the Via Bona Awards for development of our palliative care program. That makes us part of the community of donors connected to this prestigious award, so supporting its twentieth anniversary was a logical step,” says Jarmila Baudišová, Chair of the Board of Directoras of Avast Foundation. “Our foundation partners with a number of non-profit organizations and we are often interested in what other entities support these organizations’ work and who their donors are. We are interested in stories of giving and we believe that they should be shared. And that is exactly what the Via Bona Awards do,” she adds.

Other Via Bona partners include Kooperativa pojišťovna insurance company a Vodafone Foundation CR. The Via Bona Awards are organized by Via Foundation, which supports community and philanthropy development in the CR. Via strives to grow the number of people in the Czech Republic working together to give back to their communities.

Milan Dzuriak was one of the best high jumpers in his age category in the CR. He dreamed of competing at the Olympics until health problems ended his career. At age 18 he was diagnosed with a joint disease and Bechterew’s disease. “I lost the one thing I excelled at and that I lived for,” says Milan. But he didn’t let that stand in his way: he decided to rise above his own pain and help others with health problems.

Milan set off on his first “Journey against Pain”, a 2,000-kilometer bike ride around the CR, to raise money to fulfill two disabled boys’ dreams. He succeeded, raising enough to buy one of them a new wheelchair and send the other one a trip to Paris.

Milan is continuing with his charitable expeditions. His second “Journey against Pain” was a walk to the highest mountain in the Czech Republic. He raised $7,975 (CZK 190,000) and unexpectedly returned a local hero to a massive welcome in his hometown.

There is a long-standing tradition of philanthropy at ČSOB. In the early 1990s, the company was involved in the founding of the Goodwill Education Fund at the Olga Havlova Foundation and since then, it has supported hundreds of disabled and disadvantaged students through scholarships.

ČSOB continues to give back – and not just financially. Its employee volunteer programs offer both expertise and manual assistance to non-profit organizations. The bank’s Goodwill Card is a special debit card for private banking clients where a percentage of every client purchase goes to charitable causes. The ČSOB Regional Community Development Fund helps non-profit organizations learn how to effectively fundraise.

Jan Školník’s goal is to play an active role in regional development in Broumov, a remote area that shares a border with Poland and has no major cities.

His company Hobra-Školník produces filtration equipment for winemakers, the food industry and pharmaceutical companies around the world. He is also dedicated to restoring the unique Broumov monastery, which he and his team are transforming into an education and culture center.

With the support of his family, Jan Školník founded the Broumov Regional Development Agency, which strives to improve the quality of life in the Broumov region and increase tourism. The monastery hosts a summer music festival which draws people from across the country and is home to a theatre that features plays about the region’s history.

His work aims to do more than just restore the monastery – it’s about restoring community. His goals are defined by long-term vision. “We want to give people a chance to glimpse the learning that the Broumov monastery contains and help them seek what is commonly called wisdom,” he says in summary. 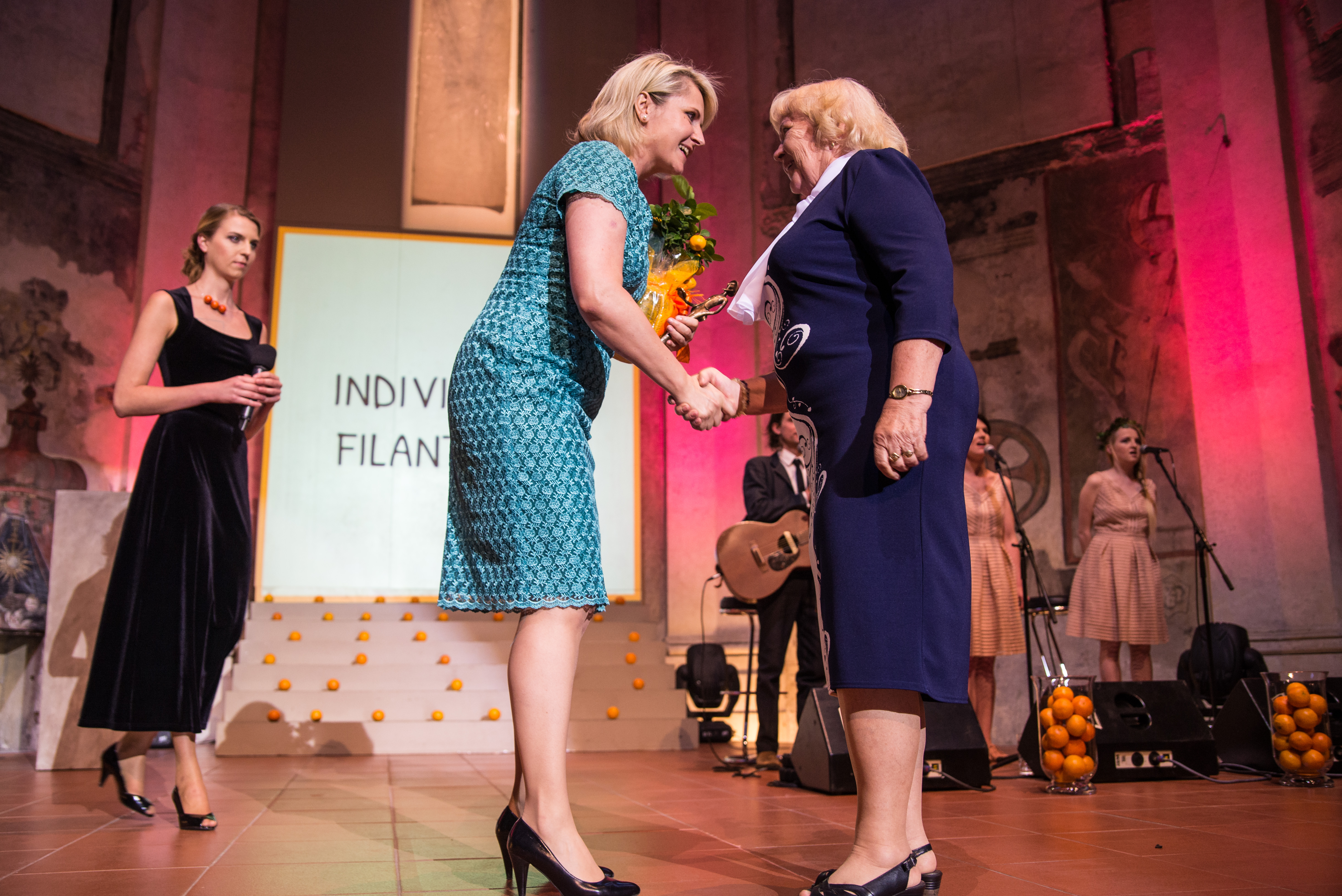 If the boy had had a bone marrow donor, he would have lived. She found out that the donor registry in the Czech Republic had far fewer people than for example in Germany. She began devoting her time and energy to a single cause: outreach among young people to encourage them to sign up for the bone marrow registry to help save lives.

Over the past twenty years, Zdenka has visited schools, made presentations, convinced factory workers and others. According to estimates by the national registry of bone marrow donors, her work has resulted in about 10,000 new donors – which means she has indirectly saved many human lives.

She is 77 years old and says this about her own giving: “Anyone with a healthy pair of hands and legs and a healthy head can realize that he or she is extremely lucky to have these gifts. It should be the responsibility of every healthy person to help those who are not healthy and who need our help in some way. It has nothing to do with religion, church, political affiliation, wealth or other such factors. It has to do with humanness. And I believe that most people are human…”