Communities and spaces in Bratislava

What glues people together in the capital of Slovakia? Who are the people with visions of creating spaces to improve the lives of Bratislava’s citizens? With the 14 participants of the ViabilityNet 3.0 program, we visited three amazing initiatives in the city.

Colourful and child-friendly: this is not how we imagine the ground floor of old apartment block buildings. Fifteen years ago, Lenka Antalová Plavuchová and her colleague Miro Dudlák decided to turn an empty ground floor space that was originally used as a shop into a place for mothers and children. It is called Ráčik Rodinné Centrum (the Ráčik Family Centre). It is not a kindergarten; instead it offers a place to stay, to meet others, to spend time together – a comfortable place for moms with young children. Ráčik rents the space from the municipality, with a renewable contract for five years, which was extended after a considerable struggle. In 2007, the then-mayor wanted Ráčik to move out of the premises and used various means to pursue his goal. Ráčik finally decided to take the whole issue to court and the organization won, which enabled it to stay. All the neighbours love the place, and are glad that at least something is happening in their area, except for the neighbours living directly above Ráčik who were anxious about the noise. Over the years the Ráčik group has found ways to co-exist with neighbours and regulate use of the place time-wise to make it acceptable for the neighbours and the users as well. The centre is maintained by a small group of people who act as volunteers; others who are members pay a small fee to cover costs.

For Lenka, a former participant of ViabilityNet 3.0, and Miro, her colleague of many years and a resident of the Rača quarter in Bratislava, Ráčik Rodinné Centrum was just the beginning. On the opposite side of the street there is an old school canteen, unused for the past 15 years. They began working with social workers, negotiating with the municipality, fundraising for renovation and interviewing and discussing potential new functions with neighbours. They gathered many ideas and were able to secure use of the building rent-free for the next 15 years under the condition that they invest EUR 200,000 into renovation work. They also received funding from a company supporting innovative youth work. Part of the building will be turned into a low-threshold youth centre with mentoring by social workers but where the youth can organise themselves and use the place. Another part will serve as a community centre, which is envisioned as a place for locals to meet and organise free time activities or celebrations. They also plan to have a small café on the premises, meeting rooms that can be used by different NGOs and offices for some of the local organisations. They would also like to hold open air concerts in the backyard, which is hidden from the street by the other school buildings.

Plan of the school canteen

Lenka and Miro seem to really care about their neighbourhood. They have yet another initiative: the first community garden in Bratislava. Community gardens are becoming popular in the region, and the good thing about this one is that it has been functioning for seven years with a constant level of around 35 owners. The project is brave and humble. The inspiration came from Prague, where Lenka once saw a community garden. She came back and copied it: the caravan standing there is the same design and colour as the one she had seen. Just copy something that is working somewhere else. The fact that we can make something function and become liveable, that is good for the community, is in itself huge! They also organise Restaurant Days around the garden, when people bring tables out into the street and eat together.

The green caravan: food makes us happy and connects us!

Dušan Martinčok, one of the current ViabilityNet 3.0 participants, wanted to change the place he lives in. It is the yard of a typical apartment building from the 1930s with a beautiful garden inside. People pass by and disappear into their homes with very little interaction. After living in the building for ten years, one day he decided to bake a plum cake, knock on some doors and hold a picnic in the garden. Surprise! Some people joined him. Since that picnic, spaces to sit have been developed, a few more plants have been added to stop cars from parking in the yard, the entrance hall has been repainted and used to hold an exhibition and serves as Dusan’s open living room, and a small box with books that can be shared and taken away has been installed. There is also a bench dedicated to a famous Slovakian writer who once lived in the house.

The ViabilityNet group stands with the values Dušan presented when speaking about his approach: solidarity, cultural cultivation and much more. The lemon stands for optimistic and efficient resource usage: when life hands you lemons, make lemonade. 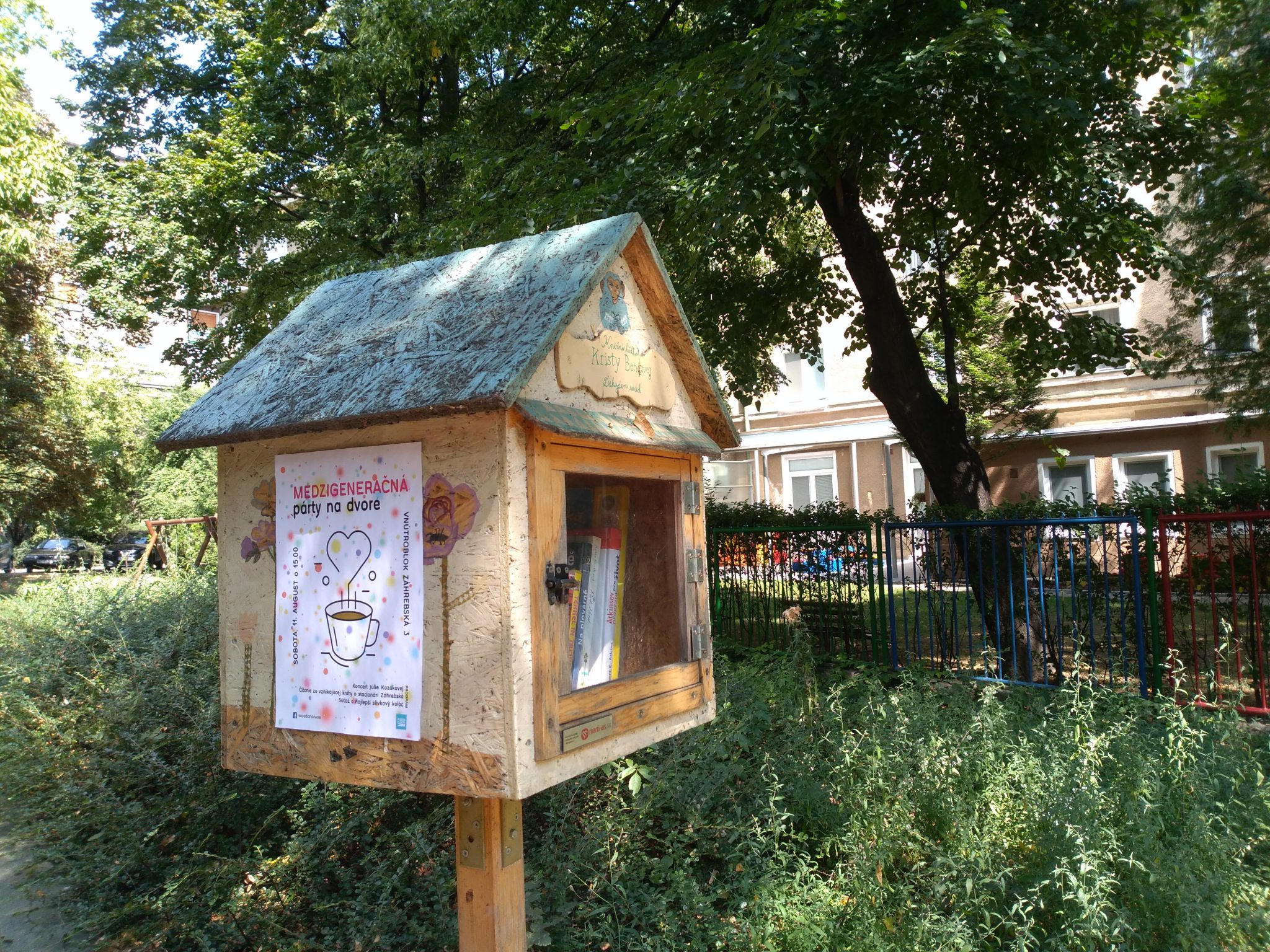 This is not only for birds to sit on, but to share books with each other.

Tomáš Peciar, yet another former ViabilityNet 3.0 participant, is the bike man in Bratislava. He created a bike kitchen, organised Critical Mass and maintains the first bike sharing system in the city. Along the Danube he and his colleagues found a horrible, dirty place beside a bridge with many parked cars; in short a place where people don’t typically like to go. They moved two containers to the site and started to reorganise the space. They built a small garden and began organising small parties. First and foremost, however, the space serves as a bike kitchen, where you can come and get help with bike repairs. The advantage of the place is that is located along one of the bike paths going from Bratislava to Vienna, so it is used by many people.

The containers viewed from the outside and the world-famous white bikes. After you register in the system, you receive a text message with a code when you want to open or lock your bike.