We are excited to announce another round of Living Communities projects! We have a team of people in Únětice u Prahy cleaning out a spring and creating a meadow park, artists in Pilsen developing a community garden, a group in Malvazinky in Prague saving a historical villa, volunteer firefighters in Rostěnice holding a year-long array of community events, a citizens’ group in Vimperk trying to save a local lake from development and a campaign to address issues with the Prague zoning plan.

Through our Living Communities program, we support projects that increase residents’ engagement in their communities and help them build ties with one another. You can see all 6 of the communities supported in this round on the map below.

How will Via support make a difference in these communities?

“ISLAND – When you need to tune out!” That is the enticing title of a neighborhood project aiming to create a meadow part next to a set of ponds in Únětice. The meadow, is owned by the municipality and is located between the Únětice Creek and a stream that emerges in the upper part of the meadow – it is, in a way, an island meadow. In the first phase of the project, the Association for Revitalization of Culture in Únětice will engage fellow residents and the municipality in making the neglected meadow accessible, and restoring the historical spring and cleaning out the stream. The group will continue to improve the meadow as finances allow. The Association also seeks to prepare a study that will show options for further development of the meadow as a park with elements such as a campfire circle, picnic area, benches, biotope, a mini-field for soccer and volleyball and an interpretative trail for adolescent cyclists from the area, etc.

“Our first goal is to restore the meadow and spring, both of which have been neglected for years, and make them accessible for people to use. We want to do this with the help of neighbors, having them help with the restoration and giving them a chance to get to know one another better in the process. The municipal council is really in support of this project, most of the councilors have committed to helping at the work parties and we will also be using the municipal tractor for the groundwork and moving material and the municipal wood chipper to process the branches from trees along the creek,” says Kateřina Vojvodíková of the Association for Revitalization of Culture in Únětice.

Artists affiliated in the Pilsen group Anymous art have been putting on public space events and multimedia projects since 1997. Now they have set their sights on developing a community garden in the city. They will rent out a small office space with a courtyard, which will become the project site. The artists and their families will engage local residents and supporters in building wooden planter boxes for a community garden in the courtyard. Children will be invited to develop their creativity through art projects in the space. The goal of the project is to communicate with neighbors and develop children’s creative potential in collaboration with people who, despite the industrial urban setting, have retained a sense of playfulness and creativity into adulthood and want to share it with others.

Pilsen courtyard as a community and art space

Hynek Marák and other members of the Rostěnice Volunteer Fire Brigade plan on organizing a spectrum of community events for their small town, giving children and other residents a chance to get to know one another better and thus developing a friendly atmosphere there. The events planned for 2019 include a clean-up day, traditional ‘witch-burning’ spring bonfire, a Day with firefighters about traveling safely, a Horse day with trailriding and games for children, a Christmas handiwork event and Christmas tree lighting. The overall aim is to encourage adults and children to interact, bring a sense of joy into the town, strengthen personal relationships and make it easier for newcomers to integrate themselves into the community fabric. Residents will be invited to help organize the events.

The Prague Metropolitan Plan has been criticized by experts, citizens and departments at the capital city’s town hall. The association Arnika collected expert comments, which were submitted officially to the city, and asked the city’s land use planning official to propose solutions to the most pressing issues raised. Arnika is continuing to work with experts, hold meetings of associations, citizens and city district governments, and work with the media to provide coverage of the plan.

For the past three years the association Vimpersko has worked to save the “Vodník” lake, located near the town of Vimperk in South Bohemia. Expert opinions have clearly stated that the natural character of the lake valley should be preserved. Nonetheless, the town council (the third in a row) has decided to ignore that recommendation and serve private interests. The town council is permitting a private investor to commission a landscape character opinion that would support an increase in the height limit for new development – despite the fact that expert opinions commissioned by the town unambiguously recommend not raising the height limit for development around the lake. The association is having another expert opinion elaborated and calling on legal services to intervene effectively.

Prague-Malvazinky is a neighborhood in the Smíchov area of Prague and part of its urban protected zone. A villa built in 1929 stands in the small street “Na Loužku”, surrounded by the original terraced garden. The owner of the villa wants to demolish it, cut down the trees in the garden and build an apartment building with a parking garage on the site. Citizens are trying to convince the local government that the development proposal is unsuitable, taking part in building permit proceedings and collecting signatures for a petition. The association Friends of Malvazinek believes that the development project would set a new precedent of allowing unsuitable development in the area that would gradually erase this historically valuable district. 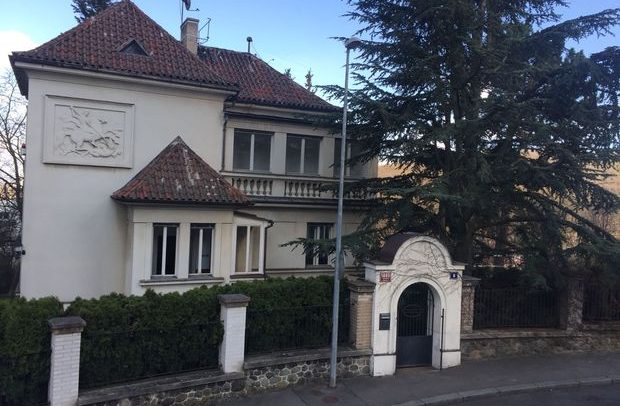