A group in the Šumperk region is turning a former parish building into a community place, while near Brno a group is using an old campfire circle to bring people together. Sharing local history can also connect people. In this look at our most recently supported Living Communities projects, you can read about how groups of engaged citizens are restoring neglected monuments such as a castle and historical building and building interpretative trails to revitalize their communities.

The ravages of time leave their mark on everything and everyone. Fortunately, here and there people appear who know how to grasp these remnants of the past, gently dust them off and make them part of our contemporary world.

The national house in Mikulov, a small South Moravian town in the heart of the wine region, is a fine example. For decades, this historical building with Baroque ceilings and a rich history served mainly as a pub. It was a gathering place for adults of various ages, professions and social status, and a place where stories were created and shared. Since the early 1990s, however, the building has gradually deteriorated. In 2017, the town government bought it and is now exploring what new uses it can take on today.

Thanks to a local association of community-oriented friends, a theater performance will take place in the national house to share the building’s stories of the past. The preparatory work and the theater performance itself will give residents a closer appreciation of the building, engage senior citizens and set the groundwork for community meetings about the future use of the national house and how it can once again become an active part of the fabric of residents’ lives.

The re-awakening of Toužim castle

For several years, the association Živý zámek Toužim z.s. (Vibrant Toužim Castle) has been working to revitalize the Toužim castle, which is in the Karlovy Vary district. The work is moving at a slow pace because the renovation costs are high and the number of volunteers is low. The association wants to bring the castle and local residents closer together and encourage local people to play a more active role in the renovation process.

“Toužim has roughly 3,000 inhabitants. The association’s work should touch every one of them. For children, our work, and the castle itself, will become their heritage one day. For now, we’d like to see them come and play here and spend some time outside with their parents. It’s teenagers and adults whom we need to involve most of all. This group should be fighting to save this monument – the most valuable the town has – and to turn it into a cultural center. Senior citizens can come and enjoy the space and share memories of the castle’s past. We welcome their advice and experience,” says Michal Nedvídek, head of the association. The first goals are to build a stage for cultural events and basic service facilities and install a permanent exhibition in the riding hall. The castle and courtyard are protected cultural monuments with great potential that deserve community-oriented restoration.

Student Tomáš Adamec and a group of friends have resolved to restore a beautiful historical 14th-century space in the village of Moravičany. It is a room in the former parish building that is connected to the kitchen and service areas. They seek to turn the space into a meeting room for local citizens, a place where residents can share opinions and ideas for enhancing community life in the village. 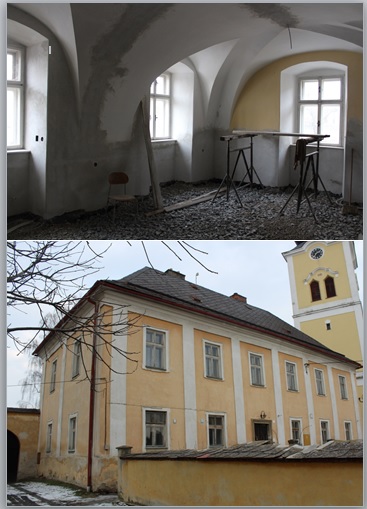 The group is currently gathering historical photos of Moravičany and books for a community library to furnish the room. “We feel this project is very important because it will establish a bridge between people with different interests and of different ages, people who have various ideas about how to improve our community,” says Tomáš Adamec.

This project revolves around an old campfire circle near Kobylnice u Brna. Situated in a forest clearing near a creek, it has been the site of many a campfire, hotdog roast and spring bonfire.

For many locals, it is the link to childhood memories. At the same time, visitor numbers at town cultural events seem to be steadily declining. In response a group of friends who call themselves the Spolek Kobylnického impéria (Kobylnice Imperium Society) is going to rejuvenate the campfire circle and engage fellow residents in the process. The project goals are to clean out the site, build new benches and a barbeque grill, plant trees and re-establish the site as a community place.

The trail of history and memory leads to a living community

A group of neighbors in Opatovice II, which is part of the town of Uhlířské Janovice in the Kutná hora region, is going to build an interpretative history trail to connect and engage local residents. Interpretative signs along the trail will give residents a detailed view of their community’s history. Along with building and installing the signs, the group will enhance several sites with benches, flowers and other amenities to make them into community places. “By reminding ourselves of our shared history, we gain a deeper bond to our community and strengthen ties to one another, too,” says project leader Eva Maximovičová.

A park in Prague-Strašnice is blooming again

The František Suchý park lies amidst the tangle of high-rise apartment buildings, historical villas and other buildings that make up Prague-Strašnice. Most of the current residents have no idea who František Suchý was, and in fact until recently there had been no information about him anywhere in the park. In addition the park is falling into disrepair. Thanks to the local government and a Czech-French society of artists and curators which goes by the name of “Bubahof”, the park is experiencing a second bloom. The group is introducing the public to František Suchý, the park’s namesake and an important figure in Prague history. He was the director of the crematorium in Strašnice from 1932 until his arrest in 1952. His son František was a resistance fighter who became a victim of the Communist regime.

In June a one-day celebration of the anniversary of Suchý’s birth and of his son was held in the park to familiarize residents with both men’s roles in history. Through Bubahof’s activities the park is once again becoming a place for people to gather.

You can read about similar projects in our 2018 annual report (here), which also lists all of our generous donors and the grants awarded last year.