Last year, the 18th century Veleslavin chateau in Prague 6 was set to be sold at auction. The Hradní Potok Civic Association ran a petition that helped save it from that fate. Now the association is striving to provide public access to the chateau and is advocating for sensitive development of the neighborhood. We spoke with asssociation members Veronika Zapletalová and Lucie Vobořilová to find out more.

How did the Veleslavín Chateau initiative start? What is your connection to the chateau and why did you get involved?

The Hradní Potok initiative got started when we – a group of neighbors – wanted our voices to be heard because of development and traffic encroaching into our ‘habitat’. We were also concerned with the gradual elimination and declining quality of public space and the lack of cultural venues in our area. And we felt like we had no way of influencing what was going on. 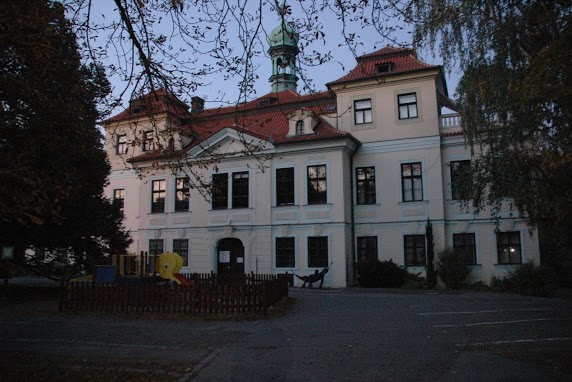 The first issue we took on was the proposed sale of the state-owned Veleslavín Chateau and park. But before that our association had commented on the new Prague Metropolitan Plan, which meant we knew what development was proposed for our area. We knew that there was a real risk that vegetation would be removed, traffic would increase, the area would become impassable and other types of infrastructure would be sorely lacking, which affects overall cleanliness, livability and safety. In short, the entire public environment would suffer if the chateau were sold. Veleslavín, which is part of Prague 6 and about the size of a district town (6,500 inhabitants), is turning into a bedroom community. It’s located along a major arterial leading out of the city, with a large traffic hub right in the middle of a residential area.

There is no quiet cultural monument nearby for residents, which is why we are trying to preserve the beautiful baroque architecture of the Veleslavín Chateau and park.

Why is the Veleslavín Chateau important in this day and age?

Today, it’s almost impossible to imagine that the Veleslavín Chateau used to be a dominant landmark in an otherwise open landscape. 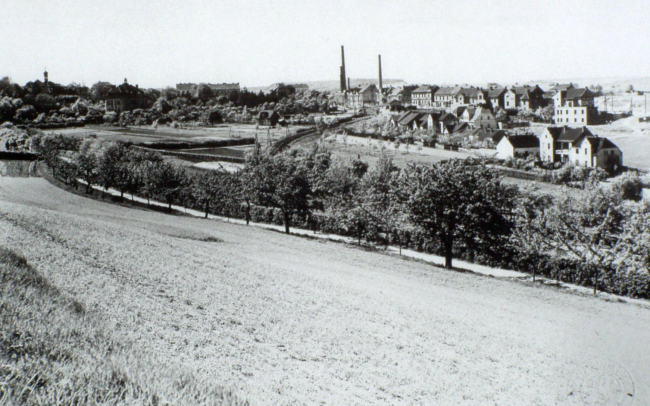 In the new Prague Metropolitan Plan, it will be the only undeveloped island of open space in an otherwise completely built-up area. The chateau grounds are the only park in an area stressed by development and traffic. It has great potential as a place offering culture, vegetation, quiet and intergenerational interaction. It symbolizes the struggle to preserve and restore physical public space – which represents “mental public space” that reflects the state of society as a whole.

What is the relationship between the chateau and T. G. Masaryk?

Charlotte Garrigue Masaryk, the wife of T. G. Masaryk, was hospitalized in the sanatorium [housed in the chateau] when Masaryk became the first president of the newly founded Czechoslovakian state one hundred years ago. Thus, for the first few years after World War I, Masaryk had his presidential office in the chateau. There was an alleé of cherry trees along a medieval canal called Hradní potok (“Chateau stream”, the namesake of our association) from the chateau to a former power plant where large-scale development is now proposed. The alleé wound its way along the stream and gardens to the Prague Castle.

Legend has it that Masaryk used to ride his horse on this path from the Prague Castle to the chateau to see Charlotte. One of our goals is to restore the path and alleéto the landscape Masaryk knew, when the area around the chateau was full of open space and gardens.

What are you proud of? What successes have you had so far with the chateau initiative? 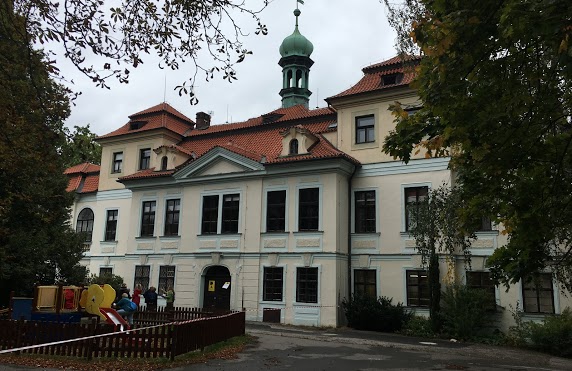 The thing we’re proudest of is that we participated in the commenting process for the Prague Metropolitan Plan last year. We submitted a huge wave of comments from local residents, who came together in an unprecedented way because they finally got an opportunity to express their opinions about the future development of their neighborhood. It sparked their interest and they want to know what’s going to happen next.

In September 2018, we put together a petition against a planned auction to sell the Veleslavín Chateau to the highest private bidder. More than 500 people signed the petition during a single week. The petition was addressed to the Ministry of Culture of the Czech Republic and other institutions and also served as a particularly important source of information for local people. We also got the Prague 6 council to take a unified position against the sale of the chateau and organized a Senate Q&A period about it. We reached out to the local and professional public and media with an intensive information campaign, set up a website www.zamekveleslavin.cz listing legal arguments against the chateau sale, and a Facebook page.

We’re also proud of our proposals to plant vegetation around the Veleslavín main intersection and the nearby cafe, even though they weren’t approved by the committee.

So public interest and pressure have also yielded results?

Yes, all over the Prague 6 district people got ready to protest against the sale of a public space to a private party. Then the night before the protest the Minister of Culture withdrew his consent to the sale, which meant it could not take place under Czech law. The Ministry of Culture declared it was interested in assuming management of the chateau complex. But so far the Ministry has not developed a proposal. We are trying to get things moving. Right after the auction was cancelled, the Prague town hall also expressed interest in the chateau, but paradoxically since it is not a state public agency, it would have to actually buy the chateau from the state.

The new Prague mayor commissioned an initial draft redevelopment plan, for which we provided ideas about how to make good use of the chateau. After the town hall elections in fall 2018, a Veleslavín chateau working group formed and we were invited to join and share our vision. This spring, our association took part in a neighborhood gathering that was part of Restaurant Day, an event held throughout Prague. The idea was to give local residents a chance to spend a pleasant afternoon together, connect the two sides of the arterial road Evropská and also share historical photos of the area. The two former villages – Veleslavin and Vokovice – have a common problem, which is the Veleslavín traffic hub and the absence of a neighborhood center and culture.

How did Via Foundation help you in your efforts?

Via Foundation gave us a grant for consultations with their “Rescue Rangers”, a team of professionals who advise groups about strategic planning and project development. They were instrumental in helping us set priorities. We had so many different issues that we could have tackled, but based on the consultations we decided to focus on two main ones: the Veleslavín chateau and the Veleslavín land use study. People in the neighborhood started to want to get involved. And then we had a big success: we got the state agency that owns the chateau to agree to open it up for the Prague Days of Architecture. We gave tours through part of the chateau complex to a limited number of people during that one day, and we were able to incorporate presentations about the chateau’s history and its current and future significance for the public.

What was the response to the chateau tours? Did it meet your expectations?

At least 600 people visited the chateau that day. We had to turn away another several hundred people as well as school groups. We used the opportunity to invite the Ministry of Culture and Ministry of Defense, Prague 6 councilors, journalists, the professional and lay public and schools to the event, which also included an outdoor photo exhibit and an interpretative trail around the chateau. We also organized a talk about the traffic issue and another talk about the potential revitalization of the local brownfields during the Prague Days of Architecture. We communicated with the media and special guests. People began offering us help. The level of public interest was huge. And now we have questionnaires filled out by children and adults which state that they are 100% in favor of using the Veleslavín chateau for public purposes, along with what they would like to see there, which is basically the same thing that we want: a public, quiet and cultivated open space that will become the heart and lungs of the neighborhood.

What are the biggest challenges that you face right now?

We want to open the Veleslavín chateau for a larger one-day event in early 2020 and also try to open the whole area, and hopefully the chateau, to the public for a whole month. Then we would like to open up the park and essential buildings to the public on a permanent basis as soon as possible, as happened with the old army barracks in Karlín and Invalidovna, [two sites elsewhere in Prague] which were originally owned by the state. We want to play a substantial role in shaping the final development proposal and advocate for preservation of the park, no demolition, no loss of trees, no new buildings and also manage the water, bringing part of the Hradní potok creek out of the canal to the surface and retain and develop the path along the creek. We would also like to develop a node of future trails and create a multi-cultural and intergenerational open space that will become a counterpoint to the busy arterial road and will not bring additional traffic into the neighborhood.

We also want to help develop an urban design master plan for Veleslavín in a participatory way. In other words, we would like to see our area develop through collaboration and open communication between residents, councilors and professionals. We’re looking for good examples – both from other Czech cities and internationally – of how to achieve that.

Our end goal is to have a beautiful, livable, friendly urban cultural environment with the chateau as a quiet cultivated centerpoint and a central public space at the current Veleslavín intersection, with pedestrian traffic on the surface and transport underground (developing the “compact city” concept, i.e. smaller urban units that aim to be partially self-sufficient, containing infrastructure such as housing, work, shopping, services, recreation, schools, health care, social and cultural services, as a way of limiting the mass commuting in and out of Prague every day. It would significantly decrease traffic and its negative impacts.)

In short, our vision is a place where it’s a joy to be in public spaces, where it will be wonderful to live and where children and adults will grow into happy and wise beings.:)