Even 30 years after the Velvet Revolution, civic engagement in the Czech Republic remains low – but Via is working to change that

On Sunday, November 17, 2019 the Czech Republic celebrated the 30th anniversary of the Velvet Revolution, which marked the fall of the Communist regime and the beginning of the country’s transition to democracy in 1989. Civic engagement is an integral part of modern democracy. This November’s 30th anniversary is a good opportunity to pause and consider two questions: How civically engaged are Czechs 30 years after the establishment of their democracy, and how does Via Foundation support people in becoming more engaged?

The data on civic engagement shows considerable room for improvement: only 31% of Czechs would help a stranger in the street (73% of Americans would do so, for comparison’s sake). “Willingness to help a stranger in the street” is one marker used in the Gallup Global Civic Engagement Report, which compares civic engagement levels in countries around the world and, in case you are wondering, subsaharan African countries rank highest in willingness to help strangers. Another marker is willingness to donate to good causes. Barma, with its strong Buddhist tradition and where donating is considered a regular part of life, usually ranks first in this one.

Overall, the Czech Republic scored 23 points and thus ranked 121st out of 140 countries (Barma was first with 70 points and China was last with 11). The report findings are based on almost 150,000 interviews with respondents from 140 countries, who answered these questions:

Have you done any of the following in the past month? How about …

– donated money to a charity?
– volunteered your time to an organization?
– helped a stranger or someone you didn’t know who needed help?

Why do post-communist countries fair so poorly in civic engagement? According to an international public opinion poll by the STEM institute, a negative perception of politics, which is apparent in the post-communist countries, contributes to a low level of civic engagement. People feel frustrated and helpless by how democracy is or is not developing, and have little faith in democratic institutions. There is a long-standing mistrust of political parties, government and parliament. Czechs, moreover, are highly critical of the EU. Feelings of disillusionment lead to antipathy and a loss of interest in public affairs and people tend to focus their energy on their personal lives. All of this results in a decline in people’s willingness to engage civically.

Trust is another important factor and it’s telling to see which local institutions people trust most in the Czech Republic: firemen are first, followed by police, the town hall, the president, courts, public media and then non-profit organizations. The poll also showed a very low level of trust between people – which is the fundamental prerequisite for any form of civic engagement. In fact, 55% of Czechs believe that when you are dealing with other people, you can never completely trust them.

The Center for Civic Education (Centra občanského vzdělávání) conducted a study that found that less than half of adult Czechs (44.5%, i.e. 3.29 million adults) are  civically engaged – leaving 55.5% of Czech adults (4.10 million) who are not. In this study, 4,000 respondents between the ages of 15 and 65 were asked whether they had participated in any civic engagement activities during the past twelve months and whether they planned to engage civically in the future.

Based on the results, the Czech population was segmented into these civic engagement categories: engaged (7.3%), apolitically engaged (22.5%), politically active (14.7%), once-in-a-while helpers (19.8%), once-in-a-while donors (25.8%) and passive (9.9%). The first three groups were aggregated as the engaged segment, making up 44.5% of the Czech population, and the other three segments (altogether 55%) as the passive group.

At Via, our job is to help turn these figures around.

Via Foundation’s twenty-year experience and the data about Czech society clearly show that even 30 years after the Velvet Revolution, the life of many towns and villages, and indeed the lives of many Czechs, are marked by resignation, a lack of interest in civic affairs, a lack of trust between people and low “social capital” (i.e. bonds between people).

One of Via Foundation’s key goals is, therefore, to help more people get involved in the life of their communities, to give them opportunities to discover that they can help make a difference and make their community a better place, for themselves and for others, and that there are reasons to trust and work with one’s neighbors. 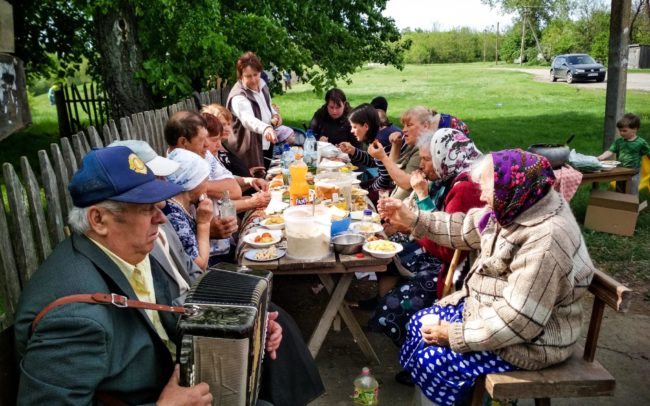 Looking back over the past 22 years of Via programming, we find that we have worked most with people from the “apolitically engaged” category noted above. This segment engages fairly often on a local level, and sometimes on a regional or national level as well. They typically engage by helping organize projects, working as volunteers, leading educational or hobby activities, caring for other people or animals, giving money or in-kind gifts, buying products whose proceeds go to good causes, voicing their opinions at city council meetings or contacting the police about problems in their neighborhoods. “Apolitically engaged” people report the strongest bond to their communities, want to continue living there, and typically grew up in the area. They look to the future optimistically and report the highest rate of satisfaction with their lives, suggesting there is a correlation between this type of civic engagement and personal contentment.

Via Foundation looks for ways to help people understand what civil society is all about and how it relates to their daily lives, and especially how to bring young people into the fold. Via offers programs for children, youth and adults who want to engage in their communities. In 22 years of community support, Via has received 13,946 applications, awarded 5,344 grants and helped roughly 20% of the Czech Republic’s 6,600 municipalities.

Just in one year – 2018 – we helped spark neighborhood and community life in 55 towns, city districts or villages, and supported 29 groups of people protecting public interests. Each year, some 500 Young Philanthropists between the ages of 12 and 26 experience philanthropy by putting on charity events with our help. More than 80% of them continue even after their support from Via has concluded. Over 6 years, we have supported more than 3,100 children and young people who organized some 200 charity events to raise $172,200 (CZK 4 million) in all. In 2018 we supported 28 groups of Young Philanthropists who organized 40 charity events.

In spring 2019, Via Foundation launched a new program called “Do not be afraid of local politics”. Through it, Via supports community leaders who are taking the courageous step of running for local office or who have been recently elected, offers them mentors, organizes discussion forums in cities in different parts of the country about pressing local issues, and raises awareness about the issue by publishing videos and articles.

Our goal has always been, and continues to be, to help grow the number of people giving back to their communities, by donating, volunteering and engaging in meaningful ways, to create vibrant places full of trust and strong bonds.