2019 was a record year at Via Foundation! We received over 300 community project applications, supported 192 projects and awarded more than $788,000 (CZK 18 million) in grants. Let us tell you about some of the people behind these community efforts. 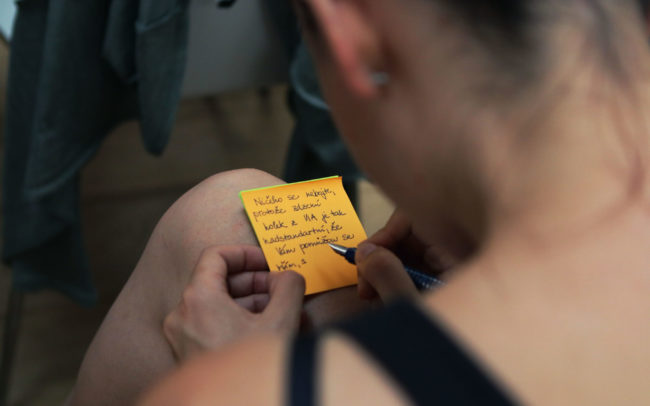 In 2019 we supported 30 groups of children and young people raising money for good causes. Over the past six years, we have reached more than 3,000 young people through this program. One of them is Míša, a girl who lives in a children’s home in the village of Janštejn in a remote part of the Highlands. She and her friends sew aprons and other products and sell them at Christmas money to raise money for a local dog shelter, where the girls also help out as volunteers.

Through this program, we support groups of neighbors and small civic assocations which run community activities or protect public interests. In 2019 we awarded 79 Living Communities grants. One went to a group in Litoměřice, where people joined forces to save their hospital. They convinced the town to hold a referendum and more than half of the town’s citizens cast votes. That so many came out to determine their community’s furture is a breakthrough, and an inspiration to other neighborhood stewards.

THE COMMUNITY IN WHICH WE LIVE

We’ve been helping people work together to design and build public spaces through this program for many years. In Řepčín u Olomouc, local residents put in 1,200 volunteer hours to create a park. Project leader Michal Mencl says: “We taught people that expressing your opinion about what’s happening in the community counts. Local residents discussed design options and reached a consensus; the whole process was transparent and democratic. At first, people didn’t believe that our aims were altruistic – that we were doing it for them without any hidden agenda. But we gradually overcame these biases and became an inspiration for other districts in the city of Olomouc.”

For 22 years, the Via Bona Awards have been Via Foundation’s way of symbolically recognizing Czech philanthropists. In 2019 the main award went to Eva Lehotská, who is working to transform a marginalized part of Ostrava, a small settlement called Bedřiška, into a community where people have begun to talk about community issues despite differences in race, ethnicity and social standing. Eva adds: “What makes me happiest is seeing how far people in Bedřiška have come since 2010 and the clean streets and homes that tenants have remodeled at their own expense. I’ll continue fighting to save Bedřiška as long as necessary and until my strength gives out.”

Through this program, we provided training and funding to community leaders beyond the borders of the Czech Republic, in various Central and Eastern European countries. One of them was Slovak Dušan Martinčok, who transformed his street in Bratislava by engaging neighbors in amateur theatre performances, a book club and public space improvements.

DO NOT BE AFRAID OF LOCAL POLITICS

We launched a new project called “Do not be afraid of local politics”, which supports newly elected town councilors and people considering running for local office. We held community discussion forums about local politics in several Czech towns and supported 11 leaders through mentoring and workshops.

We also launched a program in cooperation with T-Mobile to further media and information literacy, particularly among children and senior citizens. We awarded $87,280 (CZK 2 million) through this program to projects across the Czech Republic.

Darujme.cz is our online giving tool that makes it easy to send donations to over 630 Czech non-profit organizations. This year alone we registered 140 new NGOs and helped donors send gifts worth $5,673,150 (CZK 130 million).

Last but not least, we helped the town of Černošice set up and administer a community fund, the first of its kind in the Czech Republic. The principle is simple: local residents raise funds which are deposited into the community fund, and then the community fund’s trustees award small grants to local associations and individuals. With Via’s guidance, the Černošice community fund awarded a total of $13,100 (CZK 300,000) in 2019. This is a promising model for other Czech towns.