In 2019 more than 270 children and young people gave their time and energy to help others through our Young Philanthropists program. 15 teams of young philanthropists and their patrons held 55 charity events, whose proceeds went to help disabled classmates, senior citizens, mothers in crisis as well as elephants and turtles. Altogether they raised CZK 537,326 ($23,627), which Via Foundation matched to make a total of CZK 906,288 ($39,860).

In 2019 we added a new feature to the Young Philanthropists program: planning workshops for the teams held directly in their schools or communities. Via’s program managers led these workshops last April in towns across the country, helping the teams design and plan out their charity events. The workshops were followed by a joint kick-off meeting in May,  when all of the teams came to Prague to interact and learn together. 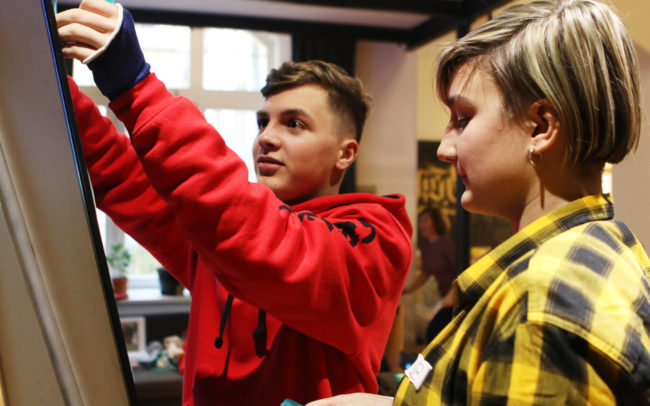 “At the Prague meeting, the young philanthropists learned how to promote and organize their events and how to fundraise. Via also gave each team a grant of CZK 5,000 ($220) to cover event costs – although some teams found local sponsors to cover these costs, and didn’t have to use any of the grant,” explained Kristina Papoušková, Via’s Young Philanthropists program manager.

From June on, charity events took place in 10 different regions of the Czech Republic and ranged from concerts, dance performances, handiwork markets to family game afternoons. Altogether, the events were visited by more than 21,197 people, a third of whom donated for the given good cause.

Once again, the Young Philanthropists showed that helping others doesn’t depend on age or wealth, and that just about anyone can hold a charity event! Over the past seven years, Young Philanthropists have raised almost CZK 5 million ($220,000) for good causes. Moreover, 85% of the participants continue holding charity events even after their projects with Via have finished.

A group of high school students in Podbořany held a charity concert for Vojtíšek, a disabled boy whom they have been helping for the past two years. At the event they also sold refreshments and auctioned off local art. They raised CZK 65,965 ($2,900) to help cover Vojtíšek’s physical therapy. The sum was matched by Via Foundation to bring their total to CZK 103,078 ($4,500). Many of the students know Vojtíšek personally and can see how the physical therapy that they have enabled is helping him.

A step in the right direction

Class 8.B from Nové Město nad Metují carried out various activities to help a mother of autistic twins. They collected apples, organized a Christmas market and produced a charity calendar.They raised CZK 65,364 ($2,870), which Via Foundation raised to CZK 77,349 ($3,400).

We’ll put a smile on your face

Girls from the educational institution in Janštejn help out at the local senior citizens’ home and at the dog shelter in a nearby village. They were so taken with the homeless dogs that they decided to join forces and raise money for the operational costs and veterinary care for sick and abused dogs. Each girl has a different skill – some make bracelets, some paint, several are good at sewing. They created and sold handicrafts at crafts fairs in their area and also informed people about dog adoption opportunities at the shelter. They raised CZK 10,747 ($470) and another CZK 17,961 ($780) through online fundraising on Darujme.cz. With Via’s contribution they were able to donate a total of CZK 48,708 ($2,400) to the shelter.

After putting on a charity event to help senior citizens, this group of five high school students decided to hold another event, a family art day. But having learned that putting on a charity event with only five people is too demanding,  the group brought in more creative classmates to prevent burnout. Event participants learned new skills and made products to take home. The group raised  CZK 12,073 ($525) to help cover the operational costs of a local animal shelter, where the students also help out as volunteers.

A group of ten young people, who share a love of reading, elephants and magic and a desire to help people and animals, held a series of charity and outreach events for the local organization ‘Save elephants’. They informed students at local schools about illegal elephant hunting. Their efforts culminated in a charity concert at the end of the year where they also sold handmade merchandise for ‘Save elephants’ and pictures of elephants made by children from Africa. They raised CZK 73,302 ($3,400) with Via’s help. 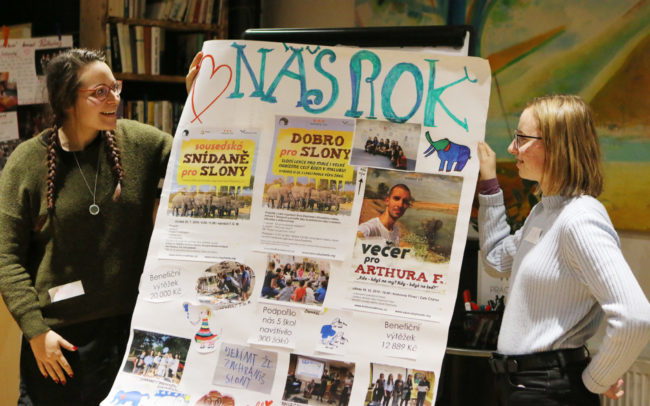 Two teachers and a group of young musicians from the town of Vysoké Mýto organize a cultural event and crafts fair for Mother’s Day every year. In 2019, for the first time, they raised money through the event. They put on a play and a musical performance and used the school kitchen to bake treats. They invited mothers and children living in the local asylum home to the event and donated the money raised – CZK 32,797 ($1,440) – to them.

A group of social work students helped the NGO Anabell, which supports people with anorexia, through outreach and fundraising. They held outreach events to inform the public about anorexia and donated money from admission and refreshments to the organization. They donated CZK 3,019 ($133) and some of the students also volunteered for Anabell to share information as broadly as possible and talk about their own personal experience.

Music for the Emausy retirement home

For almost two years, students at the Czech-English high school in České Budějovice have been visiting senior citizens at the Emausy Retirement Home – Social Services Center. They enjoy this time together. Seeing an elderly woman or man’s face light up with a smile is a particular source of joy for the students. To bring even more joy into the elderly residents’ lives, the students held a garden party with a concert by the band Babouci. To raise the CZK 23,000 ($1,100) needed for the concert, they first held a film screening and a garden party and produced a charity calendar. Altogether they raised CZK 64,384 ($2,800) – enough for two garden parties.

Elementary school students and volunteer firefighters joined forces to help Klárka, a young girl fighting her second battle against leukemia. Together, they held two benefit events: a fun afternoon with races and sales of homemade lunch bags and fair trade products, and a fair trade breakfast which raised money while also introducing people to healthy fair trade food options. They raised a total of CZK 68,727 ($2,800) for Klárka.

A group of classmates at the Máchova Elementary School in Děčín planned to hold a week of good deeds, but they like helping other people so much that they ended up carrying out many more activities. They organized a sale of stuffed animals, where they raised CZK 140,000 ($10,550) to help disabled children participating in the local “Little Steps” after-school group. Aside from fundraising they provided free babysitting to give parents of the disabled children a well-deserved break. And they collected so many stuffed animals from friends and acquaintances that they are continuing to sell them through social media.

Štěpán loves turtles and has transmitted his enthusiasm to his classmates. Last June, Hana Svobodová, who works for Chráníme mořské želvy z.s. (‘Save Turtles’ NGO) gave a presentation about her organization’s work at their school. Then the entire 6thand 7thgrades at his school embarked on a project to help save sea turtles in Borneo! They held a benefit art evening where they sold handmade products with turtle motifs and refreshments. They raised CZK 26,060 ($1,140), which was given directly to ‘Save Turtles’.

Students in an art club at the Sedlčany high school improved a site in front of their school. Working with a local carpenter, they built benches to serve both students and the public. To raise money for the bench materials, they made and sold artwork, held art workshops for elementary school students and held a crocheting workshop. They raised CZK 25,147 ($1,100) and with Via Foundation’s contribution the total came to CZK 45,069 ($1,980).

The student parliament at the Karlovy Vary Elementary School is always busy with something. In addition to addressing student needs, they organize charity events. In June they held a Strawberry crafts fair where visitors had a chance to taste all manner of goodies and buy products made by students from the school. There were also fun workshops and a magician. They raised CZK 106,848 ($4,700) which they donated to help a classmate with muscular dystrophy, who also served as the event photographer.

In the town of Vsetín, a group of students who share a love of nature and desire to support fair trade products meet once a month at the Líska ambassadors’ club and also volunteer at the local Wildlife Rescue Centre. During “Neighborly Week” in May, when the town square was full of community events, they ran a fair trade café and raised CZK 15,000 ($660), enough to buy a month’s worth of feed. They provided coffee and tea on a donation basis and ran activities for children, parents and other visitors. Via Foundation matched the money they raised, bringing their total to CZK 30,000 ($1,320).

We have now opened the 2020 Young Philanthropists program and are looking forward to another slate of inspiring projects, which we will share with you later in the year!