How should cities develop and change in the upcoming decades to make them good places to live? What visions do elected officials from large cities and small towns bring to the conversation? The Cities 2030 conference, organized by the Centre of Architecture and Urban Planning in Prague, explored these questions with leaders from the Czech Republic, Slovakia and Sweden.

At Via Foundation we are convinced that engaged citizens are an essential part of making cities livable. Forward-thinking city leadership makes it easier for people to turn their neighborhoods into vibrant places. At the Cities 2030 conference, representatives of large cities such as Prague, Bratislava and Stockholm as well as mayors of small Czech towns such as Semily, Hustopeče, Kadaň and Litomyšl presented what they are doing in this regard.

Prague Lord Mayor Zdeněk Hřib kicked things off by presenting his vision for Prague. Making housing affordable is a priority, both by building new apartments and addressing issues with Airbnb and similar short-term housing platforms. Within a decade he hopes to see a new subway line (D) up and running and completion of the city ring road.

Bratislava’s Lord Mayor Matúš Vallohas has already implemented many of his visions for the city. Similarly to other capitols, Bratislava has a shortage of parking spaces and rental apartments. The city leadership is focusing on updating public transportation, buying rental apartments, strengthening the police force and improving maintenance of city vegetation. Another priority is improving public spaces. To find out whether people in a particular neighborhood are interested in having a new public space in their area, the city creates a pop-up public space on an unused site. If people show interest in the site and spend time there, the city goes ahead with master plan development.

Sweden also has experience in making cities serve people rather than companies or cars. Kristina Alvendal, deputy mayor of Stockholm responsible for land use planning and properties, asks herself a key question: What do people truly want and value in a city? In her opinion, posing this question is the first step to creating cities where people really want to live. One of her tasks is making the Stockholm airport district more appealing. Attracting people to an area far from the centre where there is little except for the airport and large warehouses would seem a daunting task. But Kristina believes that if city representatives, real estate companies and other businesses can find common ground, it will be possible to develop an area in which people will want to live as well as work.

Anticipated population growth was a common thread in all of the talks at the conference. It is estimated that 84% of the population will live in cities by 2050. Forecasters predict that Prague will have 2 million residents by 2030. Where will they live? Will they fit into the existing city or will new neighborhoods develop beyond the current city boundaries? Jaromír Hainc from the Prague Institute of Planning and Development presented one of the city’s ‘transformation areas’: Bubny – Zátory between Letna and Holešovice, long considered a potential site for new apartments that could house up to 25,000 residents. Whether the current Prague city leadership  will manage to initiate development during the upcoming decade has yet to be seen.

Semily is a small town with 8,000 residents, located in the charming landscape along the Jizera River. It is popular with tourists and hikers and Semily mayor Lenka Mlejnková is working to make it just as beloved by residents themselves, especially young people, who tend to move away. To help parents choose extracurricular activities for their children, she has established an event called ‘Not bored in Semily’, where clubs and associations present their extracurricular activities. There is also an alternative Waldorf school in Semily that offers education from preschool through high school. The mayor also strives to communicate with citizens and engage them in community events and to set an environmentally responsible example by using cloth shopping bags and reusable cups at events.

Hustopeče boasts the northernmost almond tree orchard in Europe. One of the town’s more practical advantages is its accessibility from the Brno-Bratislava highway. However this advantage carries a negative side: when there’s an accident on the highway, drivers find shortcuts through the town and that means frequent traffic jams. Similarly to other towns, Hustopeče also faces a shortage of parking spaces. Mayor Hana Potměšilová is working on this issue and on expanding disabled-accessible paths and biking paths. She has introduced a city-run schoolbus for children and an online platform to make it easier for citizens to communicate with city hall. Hustopeče, whose history is tied to T. G. Masaryk, has a number of monuments that are gradually being renovated. One example is the sensitive restoration of a 19th century association hall, another is a new multi-purpose building with activities for all age groups. 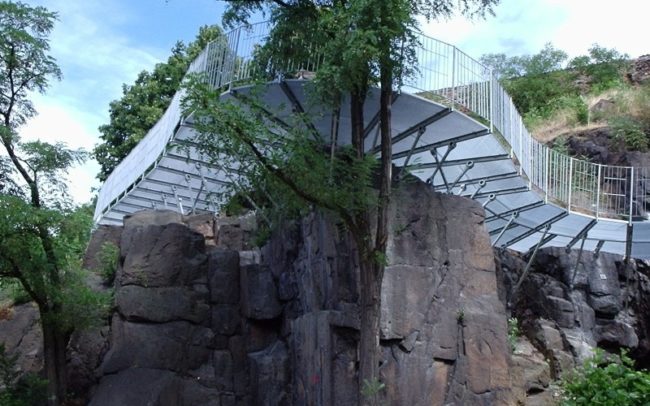 The town of Kadaň lies between two mountain ranges. It suffered a lot of damage under the Communist regime and was in a desolate state when mayor Jiří Kulhánek first took office 18 years ago. The development of a housing estate on the town’s outskirts had taken residents and vibrancy out of the historical centre. Rejuvenating the centre and making it the heart of the community became one of the mayor’s priorities. He began by preserving and gradually restoring several monuments, seeking inspiration from cities across Europe, then spearheaded the development of a strategic plan in 2004. The plan included attracting leading architects, who imbued the town with a modern and people-friendly tone. Their work includes a highly regarded cyclists’ bridge, an open-air cinema and renovation of one of the town’s squares based on an architectural student’s design. The town likewise strives to balance infrastructure for pedestrians and cyclists with the needs of cars and mass transit.

Daniel Brýdl has only been mayor of Litomyšl for one year. But he follows in the footsteps of his father, who served in the same position for many years. Litomyšl has maintained a distinctive and unified design style by working with a limited circle of architects, namely the town architect employed since 1991 and contemporary architect Josef Pleskot. New buildings, even chain supermarkets, must follow the town’s architecture manual. Litomyšl has about 10,000 residents, which, according to the mayor, is big enough to spawn a few visionaries who can take the town in new directions and small enough so that everyone knows everyone else. Litomyšl was selected as the 10th best place to live in the Czech Republic. In contrast to other towns, residents are not moving away – in fact the population is increasing. Businesses are creating new jobs and recently formed an association of local businesses called “Made in Litomyšl”. Mayor Daniel Brýdl also strives to engage young residents into discussions about the town’s future through intergenerational discussion forums.