The municipal leadership in České Velenice, a small town in South Bohemia on the Czech-Austrian border, commissioned an urban development plan. The plan includes restoration of a 100-year-old allée (i.e., formal row) of trees, which means, in reality, chopping down over 300 mature trees. Should the allée be felled to fulfill the town development vision, or should it be preserved? We awarded a Fast Grant to a local group to fund an alternative dendrological assessment, and keenly followed the subsequent community discussions.

The allée of linden and horse chestnut trees was planted in the 1920s. Last year, the town leadership put forth an urban development vision that includes a radical restoration of the allée, whereby 340 existing trees would be chopped down and a new allée would be established. The poor health of the existing trees is the stated justification. But many local residents and a number of independent experts argue that the existing allée has tremendous value that is not being taken into account.

The center of České Velenice, essentially where everything of consequence takes place in the town, is the street Revoluční třída, which leads from the monumental train station to the Czech-Austrian border and on to the town of Gmünd in Austria. The two towns were originally one and although they were divided after WWI, they still form a contiguous urban unit. The allée, which is up to four rows deep in places, is officially registered as an important landscape element and is the town’s dominant vegetation landmark. It is used by both local residents and visitors as a park and as a pedestrian route to the train station. The town leadership is aware of the significance of this linear vegetation element, and therefore a new allée was incorporated into the urban development plan prepared by the urban design firm City Upgrade s.r.o.

In the new town development plan, the site of the existing allée is designated as a public space connecting existing development with proposed new, compact development along the railway corridor, an area that is underutilized at present. The new allée would be located several meters further from this development on the other side of the street Revoluční třída and would be comprised of even-aged horse chestnut trees.

A community discussion forum about the allée’s role and fate was held at the Fénix Czech-Austrian community center. Dendrologists and arborists voiced various opinions about the condition of the trees in the existing allée and their expected lifespan. The mayor of České Velenice, urban designers, irrigation specialists, an entomologist and prominent Czech architect Zdeněk Fránek (Fránek architects, s.r.o.) also spoke at the meeting. Emotional statements were made by people from both the pro-plan and anti-plan groups, and some recalled how reconstruction of the street running parallel to the allée and sidewalk repairs had devastated the trees in previous years. One person posited that not dealing with the allée now would just push the problem off for future generations to grapple with. Others countered by saying that the current town leadership could, and should, give the trees the care they need to markedly extend their lifespan and vitality. Architect Zdeněk Fránek expressed a powerful thought inviting reflection when he compared old trees to the elderly, who were protected and kindly cared for by their fellow citizens during the recent Covid-19 pandemic. Why then, he asked, should we eliminate mature trees instead of protecting them? 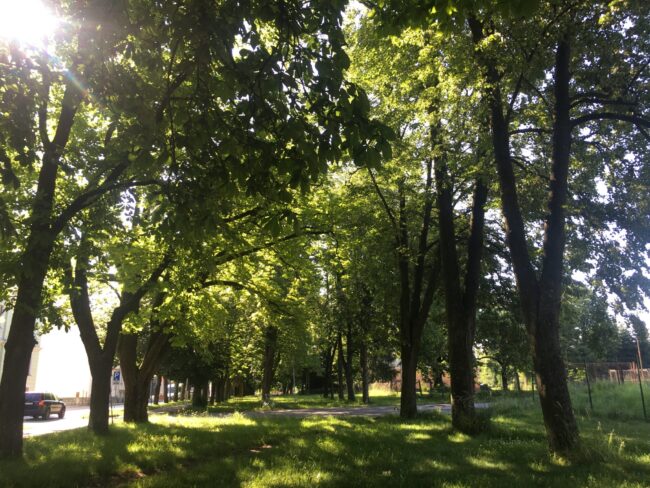 Through the dedicated action of the residents who organized the community discussion forum, other local citizens began realizing the enormous value of existing vegetation in the town. Many were surprised to learn that the new town development vision does not include the 100-year-old allée. As Irena Šefčíková, one of the initiators of the discussion forum, says: “The key question that emerges is whether a horse chestnut allée composed of remarkable 100-year-old trees should give way to the new urban design, or whether the existing allée should be part of the new plan?” 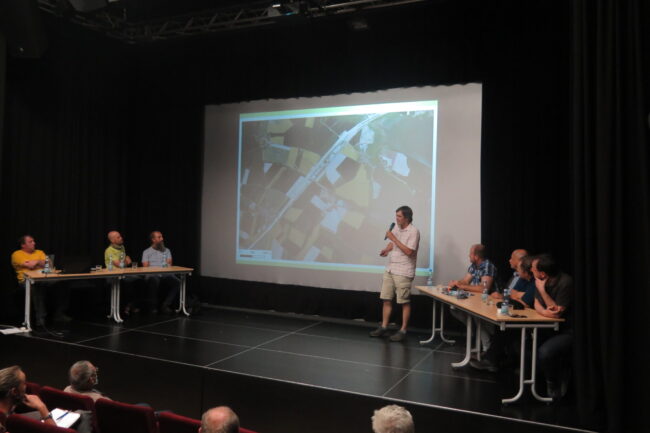 What comes next? The group which organized the discussion forum is planning to call on additional arborists, engage experts to lead an informative tree restoration seminar in the town and hold a workshop about the 100-year-old allée for young people in the local movie theater. We will continue to monitor the fate of the 100-year-old allée in České Velenice and citizen engagement in the issue.

We supported the project “Preservation of a 100-year-old linden and horse chestnut allée” with a Fast Grant as part of our Living Communities program.