These four classmates from the town of Blovice share a love of music and a desire to help others. They founded a band called Railtale and joined our Young Philanthropists program. They organized a series of four benefit concerts and raised $5,650 (CZK 118,000) in donations, which they gave to the Domov hospice in Pilsen. We spoke with the girls and their homeroom teacher in the town of Nepomuk, where they were performing to commemorate the 130th anniversary of the founding of the local orphanage. During our conversation we also learned that it was the girls’ final concert…*

Your teacher just told us that this was your last concert. Why is that?

Railtale: We have known for a while that this would be the final concert because after we graduate we’ll each go our own way. During high school we had the capacity to meet because we had the same schedule and could rehearse songs at school, which was great. Now it’s harder to get together; each of us lives in a different town and we are each going to go to a different university. Two of us are staying in Pilsen, one is moving to České Budějovice and one to Prague.

So it seems that it is hard to find any geographical overlap. Did you think about meeting on the weekends for instance?

Railtale: We wouldn’t be able to manage it even on the weekends. For example, I have rehearsals for a theatre play that start of Fridays so my weekends are booked as well.

Let’s go back to the beginning. First you founded the band and then you joined the Young Philanthropists program, is that right?

Railtale: That’s right. We all used to go to the community music school and so we knew how to play musical instruments. So we had experience performing for the public because when you take classes at the community music school you have to perform in concerts. And so we said, maybe we could try to establish a band. Our first concert was on 22 December 2018 in a cafe in Blovice and we subsequently had more concerts there. Once we played at the Pilsen train station. That was a trial that was more of an error, because the pianos they have at the train station aren’t in the best shape (laughter). But we’re glad that we had a chance to try busking (editor: playing music on the street).

And how did it go, did people come and listen?

Railtale: Absolutely. A few people stopped to listen and one lady brought us homemade donuts (“vdolky”), for the beautiful songs, she told us (laughter). We also played thematic concerts, for example to commemorate the anniversary of the Velvet Revolution and a Christmas concert. We play a mix of songs, which we love. That was also one of the reasons why we decided to found a band. Even though each of us performed through the community music school or some other group, we didn’t have a chance to sing and play what we wanted to. So this was a way to sing and play the music that we like. Fortunately, we are in sync in terms of music preferences so it wasn’t hard to choose specific songs. And we usually rehearsed twice a week at school. 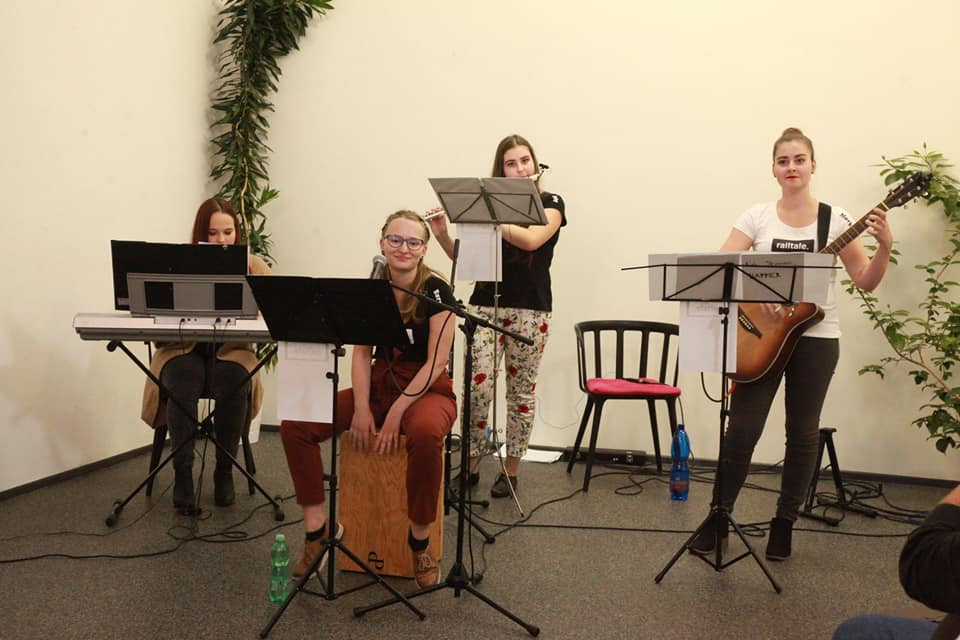 So you play covers of songs?

Railtale: Yes. We have to choose songs that we can play on our instruments and often there aren’t any notes for them. So for example Adéla had to create all her notes herself, because there weren’t any notes for the flute. But then she played what a violin would have played in the original version. Violins are common in pop song compositions and I think the flute substituted beautifully.

How did you come up with the name of your band?

Bára: I thought of it (laughter). It is a compound word from “rail” and “tale” and it means railroad story. Each of us rode the train to school from a different town, so it was railroad tracks that meet in Blovice that connected us.

Back to 2017. When did you apply to Young Philanthropists?

Raitale: In 2018 we played in the town of Zdemyslice to commemorate the 100th anniversary of the founding of Czechoslovakia and there was a woman in the audience who was really active in charity events. She knows different non-profit organizations and suggested that we could apply to the program.

Before that, it never occurred to you to help the needy through music?

Railtale: It never occurred to us that we could raise so much money through our performances, that people would give so much in donations at our performances! First we wanted to raise money for children with cancer but we were told that they didn’t need the money so much and recommended the Domov hospice in Pilsen.

Railtale: There’s a very kind director at the hospice and she was great to work with. She was really glad, grateful and surprised that we wanted to do it. The collaboration with the hospice was perfect. The director came to our concerts and always said a few words about the hospice at the beginning so that people would know what they were donating to. Later we played at the hospice day of open doors.

How did you choose concert venues?

Railtale: We played in places near our homes – Nepomuk, Blovice and Plzenec. Then it was like a chain reaction – people would approach us and ask us to play in their town. Our first benefit concert through the Young Philanthropists program was in a church in Nepomuk. That was probably the loveliest of all for me because the interior of the church is so magnificent. I love singing in church in general because the atmosphere is always so beautiful.

How much did you end up raising for the hospice?

Railtale: Including the matching grant from Via Foundation we raised $5,650 (CZK 118,000), whcih was the most out of all of the Young Philanthropists projects in our year.

It sounds idyllic. You are friends, you agree on everything – did you ever have a crisis moment?

Railtale: Each of us went through a crisis trying to combine performances with studying. It’s probably the same with all extracurricular activities, that they really get in the way of studies. And each of us is involved in other activities, too, so it was hard to juggle everything at times. But otherwise I think we divided up the tasks fairly, no one felt that she was doing more than the others. I made the playlists, and the others communicated with Via and took care of the paperwork. It was balanced.

And the best moment?

Railtale: The money that we raised is nice, but the happiest part for me is when someone praises our playing. And of course it made me satisfied when the hospice director was so happy. Personally, I am really happy when we play really well together, even though at some rehearsals it doesn’t seem like it (laughter).

Ivo (teacher): It was wonderful that people came to more than one concert, there were about 20-30 people came out on a regular basis. So in addition to the money raised, the fact that people came repeatedly was a great source of satisfaction for the girls.

How would you sum up your involvement in the Young Philanthropists program? What did you take away from the experience?

Railtale: We definitely got a lot of tips on how to put on a benefit concert. And just the idea of holding a benefit concert would never have occurred to us if we hadn’t taken part in the program. Also the number of concerts that we held in the end helped, I don’t know how we would have motivated ourselves to put on so many performances if it hadn’t been for the program. And the performances led to  more invitiations to play somewhere else. For example, we were invited to play in the church in Neurazy on the anniversary of the Velvet Revolution after the mayor heard us play in Nepomuk.

Based on your experience, what recommendations would you have for someone considering organizing a similar charity event?

Railtale: To choose something that they love so they don’t have to force themselves to do it. We spent really a ton of time on our project and I can’t imagine doing something we didn’t love, even for charity. It was easy because we were doing something that we find fulfilling. Also it probably isn’t a good idea to do it alone; it’s good if there are more of you to divide up the tasks.

Ivo, what was your role in the project?

Ivo: I was just the adult supervisor because one requirement of the Young Philanthropists program is that each team be led by an adult patron. At the time all of the girls were minors and I was their homeroom teacher so I was happy that they choose me. But the girls managed all of the tasks essentially by themselves – including what the project was going to look like and who they were going to raise money for. I helped with financial things but the girls took care of all of the operational aspects themselves.

Do you try to lead students at the Blovice high school towards philanthropy or was the girls’ involvement in the Young Philanthropists program an isolated event?

Ivo: It definitely wasn’t an isolated event. We work with the orphanage in Nepomuk, for example, and we organize concerts for the retirement home in Blovice once in a while. Through the Red Cross Long-distance adoption program, we have adopted a little girl from Africa and as a school we give to varoius charitable causes. So the girls had some experience and there was a tradition to connect to. But it was the first time the Blovice high school joined the Young Philanthropists program.

Did you know that Railtale’s success motivated another team from the Blovice high school to join the Young Philanthropists program?

Ivo: I hadn’t heard about that but it would definitely be worthwhile to continue with the program. Railtale’s success is a great advertisement for the school. And it gave the girls tremendous satisfaction to know that they were capable of doing something so big with their talents. They worked together the entire time and knew exactly what they wanted to do. Everything went smoothly and I enjoyed the three-year period. I learned a lot, both from accompanying the girls and the foundation’s workshops, where I had a chance to see what other school teams were doing.