One year after the tornado in South Moravia

June 24th marked one year since a tornado hit five municipalities in South Moravia. Via Foundation was one of the first organizations to announce a charity collection and by December 2021, corporate and individual donors had donated over CZK 248 million (over $10.5 million). As of June 10, 2022, thanks to our generous donors, we were able to give 1,633 grants totaling CZK 222,147,376 ($9.4 million) to people from the five most heavily affected municipalities to help them rebuild. Via is distributing the last batch of funding from the collection right now through the Neighborhood Revitalization program.

“The funding that non-profit organizations collected was crucial because people received it very quickly. If you have a house without a roof, it doesn’t help you that the state or the insurance company promises to give you a contribution six months later. You need cash quickly to buy basic materials and pay workers,” says Zlata Maděřičová from the village of Moravská Nová Ves. Shortly before the one-year anniversary of the tornado, she hung curtains on new windows. She adds: “To this day, when a big wind rises, I go sit in the cellar. It was a terrible experience. On the other hand, if it hadn’t happened, I wouldn’t have gotten to know so many people who came out to help us, right away, without wanting anything in return. Sometimes I think that the media forgot about them, even though their help was essential to us.” 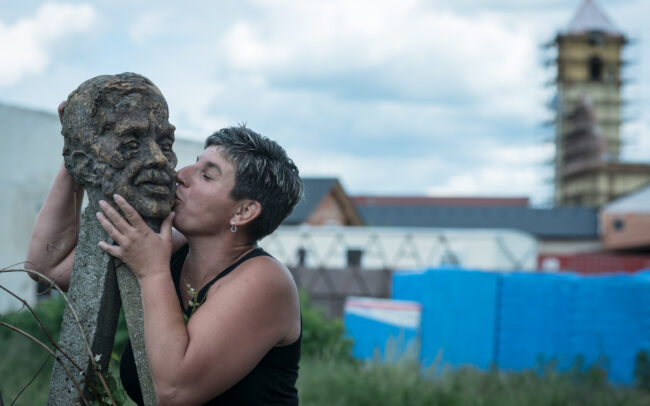 While roofs and homes were lost, some things remained inexplicably unscathed – like this bust of Vaclav Havel, which volunteer Barbora Zdráhalová kisses in gratitude.

Via Foundation announced its charity collection to help five South Moravian villages on the evening of June 24th. An incredible $10.5 million was donated by individual and corporate donors by the end of 2021. 93% was allocated for direct assistance to households. There is also follow-up assistance, i.e. further support for “complicated” cases of families where the first round of support was insufficient. Via is currently distributing 6% of the collection through the Neighborhood Revitalization program and 1% of the collection covers administrative costs.

In the first week after the tornado, Via Foundation disbursed CZK 25 million ($1 million) to 5 municipalities to help them remove the most significant damage. In order to help the affected households effectively and also distribute funding equitably, Via divided the support into three phases and coordinated its activities with other non-profit organizations. In total, it paid out 992 grants to households in the total amount of CZK 158,960,000 ($680,000).

Next grape harvest in 3 years

For many residents, the tornado not only meant the loss of a house or a car, but also damaged small businesses or orchards and gardens. Some people thus lost their livelihood or chance to earn extra income, and their neighbors as customers lost valuable services and products. In response, Via Foundation also issued a grant call for the support of small businesses and gave 625 grants in the total amount of CZK 35,319,000 ($150,000) in this area.

The Bartoníks were one of the supported families. “The tornado damaged my father’s house, the roof of the winery and part of the vineyards,” says Radek Bartoník. “We’ve been able to fix a lot already thanks to the amazing solidarity people have shown and aid from the state and non-profit organizations, but with our vineyard for example it’s going to take a really long time and we haven’t even started repairing our father’s house yet. But we were able to repair our winery roof last year, thank goodness,” he adds.

The Bartoníks suffered damage to their winery, vineyards, house and orchard. They’re planting new vines which will be ready for harvest in 3 years.

The greatest wish of people from all five municipalities is for life to return to normal. They want to get over it and rejoice in everyday life. They lack places to meet, vegetation and trees. The last batch of funds from the collection will therefore be distributed by Via Foundation through the Neighborhood Revitalization program for projects where local people rebuild public spaces together. Since March, we have supported 10 projects from the program in the amount of CZK 867,500 ($36,000) and we are continuing.

One of these new projects is located in the city of Hodonín in the Bažantnice district. Last year’s tornado damaged the garden of the local free-time center beyond repair. “During covid when practically all social contact was limited, people gathered informally in this gardenor rested among the trees. Our project wants to bring life back to the garden. We’re building a pergola that will allow people to spend time in the garden in any weather, “says Šárka Látalová, director of the Free-time Center, adding: “We’re planning to clean the garden with volunteers and local people this month, and start building in September, and having a grand opening in October.”

The free-time center in Hodonín was ruined but a community project is recreating it as a center of gathering.

The aim of Via’s assistance is to minimize the negative impacts of the tornado on community life in the villages. Another project re-energizing community life is the Summer Cinema in Moravská Nová Ves where films for young and old will be shown over the course of four evenings. The movie evenings include refreshments and games for children. The cinema is run by local volunteers from the local basketball club, Brouček family club and town employees. “The tornado made it hard to keep up interpersonal relationships, so a social event in which you feel part of the community again is welcome and will help strengthen ties among neighbors,” says one of the three organizers, Michaela Víšková, adding: ” We want to see smiles on the faces of our fellow citizens after this event. It may seem like a cliché, but we have many months when we did not feel up to laughing. So the good mood and joy that we will see with this event will be our reward.”

Restoration will not be easy or fast, but everyone who is involved can feel the huge energy and desire to make the destroyed spaces a beautiful place to live once again. We thank all of our donors for giving.

Summary numbers
By June 10th, the Via Foundation had paid out CZK 222,147,376 ($9.4 million) and thus supported 1,633 projects. We could not do any of that without the support of all generous donors. Thank you.