Ready or not, here come our 2019 Young Philanthropists program participants. The youngest is 10 and the oldest is 18, there are over 150 of them in all and they come from all over the Czech Republic.

All of the teams and their adult patrons (i.e. teachers or others who serve as guides) came to Prague for an introductory workshop we held in late November. They presented their projects to each other, heard valuable fundraising and promotion tips and had a chance to explore Prague.

The introductory workshop in Prague.

What are these Young Philanthropists all about? Like their predecessors, they are all keen to organize benefit events for good causes. They are typically school groups or groups of friends, drawing on their diverse talents to hold concerts, bake sales or auctions of their artwork, for example. Each team chooses a cause, which most commonly have to do with helping disabled children, senior citizens, animals in need or the environment. We give each team a small project grant of CZK 5,000 ($220) for event costs, and we also match the funds they raise up to CZK 20,000 ($880) to give them extra motivation. On top of that, teams which raise more than CZK 30,000 ($1,324) get a bonus that goes directly to the organization or person they are helping.

And without further ado, here are the 2019 teams! 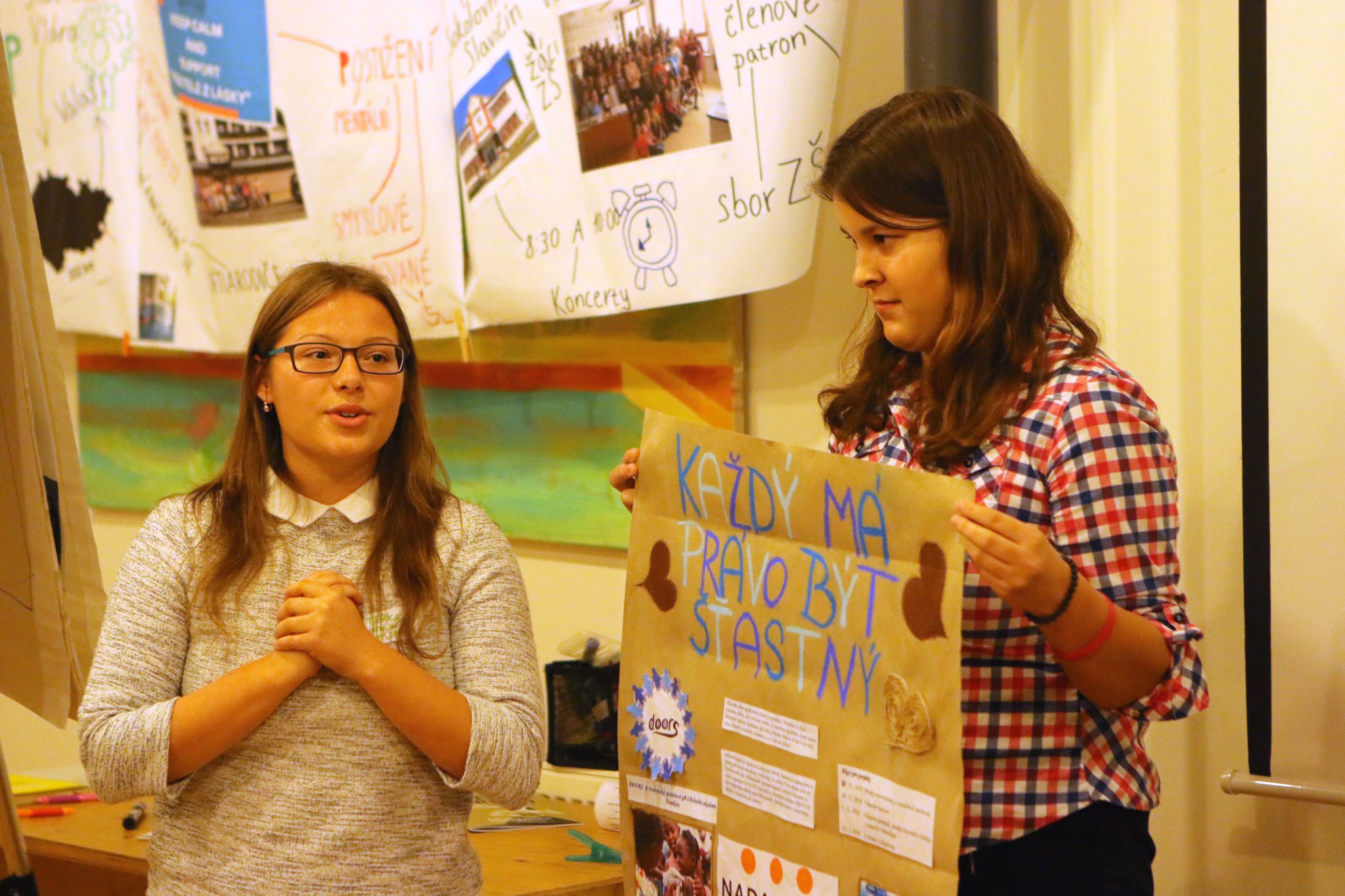 One of the fifteen teams presenting its project.

JINAK Club – For the joy of Marek

Kristýna, Alice, Simona, Adriana. Four teenager girls who are organizing their second benefit event. As they say, they like to do things differently – for others. This time they are helping 9-year-old Marek, diagnosed with bone cancer this year and bedridden because of the illness. The girls are going to hold two benefit concerts for Marek. The proceeds will be used to buy medicine that helps with recovery after chemotherapy and which is not covered by health insurance. And what’s more, to show Marek that he isn’t alone, they will set up live streaming of the concerts so that Marek can watch them, too.

This is a group of eight friends from Olomouc ages 12 to 14 who says they share a crazy view of the world. They have already held several benefit craft markets to raise money for environmental protection. This year they want to support the Rainforest for Children Association (“Spolek Prales dětem”) by holding a holiday craft market. Their goal is to raise CZK 15,000 ($660). We say, the more teenagers with this type of crazy view of the world, the better!

Charity work is nothing new to the members of the J.K. Tyla elementary school student parliament in Písek. They take part in many school events, often to help other children. This time they want to help children in a nearby orphanage by holding a series of benefit events, including a fun run, a mini-bazaar and a face painting event. The proceeds will help purchase sports equipment for the children from the orphanage, who will also be invited to all of the events.

Railtale for the Home hospice

Besides friendship, these four classmates share a love of music and giving back. In 2017 they formed the band Railtale. Trying to help someone in need by doing something you love: what could be better, they say? They will give the proceeds from four concerts to the Hospice Pilsen Home, which provides at-home care for the terminally ill and is needs funding to cover its operations.

An afternoon for Firefly at Lesní Liberec elementary school

The school parliament of the Lesní Liberec elementary school will hold a benefit event for Firefly Czech Radio Endowment Fund (Nadační fond Českého rozhlasu Světluška), an organization which helps blind and visually impaired people. Student musicians, the school’s dance group, and the Firefly fund staff will organize an event where guests can try out what it feels like to be blind and learn about appropriate ways of interacting with the visually impaired.

Students of a high school in Luhačovice will hod a charity Majáles event, which will bring together people of all ages for a good cause.  Students from different grades will perform as well as the local Active Senior Citizens association. The proceeds will be used to buy a wheelchair for immobile residents of the Luhačovice senior citizens’ home.

Everyone has a right to be happy

“Our doors are open to everyone”. That’s the motto of DOORs, a student group at the Neveklov business academy that aims to build bridges between generations and help people. Comprised of students ages 16 to 18, DOORs regularly organizes events that “put a smile back on people’s faces”. As they say, the size of their school is small but the size of its heart is huge. The students will hold a series of benefit events to raise money for UNICEF development projects.

Fourth grade students at the Božena Němcová school in Hradec Králové love to do good through baking. They are going to hold a charity bake sale with an ecological side to it. The students want to draw attention to excessive use of plastics and the destruction of rainforests due to palm oil production. The money they raise will go to Good Angel, which helps families of people with chronic illnesses.

There are six of them. They are stubborn, like to push their own limits and run a puppet theater. They also love animals and helping where they can. After encountering an abandoned bird, this group of students from the Náchod high school got to the know the Rescue station for disabled animals in Jaroměř, which is also fighting for its life due to a lack of funding. That gave them the idea of supporting a place defined by empathy, hard work, endurance and altruism. With the help of their fellow students, they will hold a charity cookie sale for the rescue station.

Fourteen-year-old Bára and Nicolas and eleven-year-old Theodora are classmates at AMA SCHOOL, a Montessori school in Most. They will lead their classmates in organizing a series of benefit events to raise money to build a playground at the Asylum home for women and mother with children in crisis. The students will put on a play, hold an auction of artwork and collection of toys and clothing for the children, whom they will invite to their events.

This group of eleven-year-olds cares about their community. When they heard about a local association called Let’s stop the suffering, which helps abused and disabled dogs and cats, it was a clear choice. They plan on involving their entire elementary school in Olomouc in creating artwork and postcards for a benefit art sale. The proceeds will be used to buy equipment for the animal shelter and food for the animals.

Members of the school parliament of the Silesian high school in Opava plunge headfirst into everything they do. They love to help others and organize events for the whole student body. Each year, they hold a Gymplbands concert featuring school bands, and they also work with a local special needs preschool. The group got the brilliant idea of connecting these two activities, finding more local donors and donate the proceeds from the concert to buy a special baby stroller for a toddler suffering from cerebral palsy paresis.

The members of the student parliament at the Slavičín – Vlára elementary school are ages ten to fourteen. They are an active bunch, creative and eager to help in their town. They will hold a holiday benefit concert for the general public. The proceeds will be used to pay for short-term convalescence residencies for disabled children.

This group of ten children take a keen interest in the world around them and want to help make it a better place. They will hold a series of benefit events with the dual goals of raising money for a good cause and strengthening the community spirit of their school. The voluntary admission from the events will go to the Krásný Les dog shelter in north Bohemia.

Playing for a good cause

Eighth grade students at the Přerov elementary school love to play and love to help others. They will bring these two passions together in a benefit game day for the whole school community, including teachers, parents, siblings and other donors. Along with games, the benefit day will include a bazaar and sale of homemade cakes and other refreshments. The proceeds will go to a hippo-therapy program and treatment of a sick girl in the neighborhood.

The Young Philanthropists program aims to show children and young people that anyone can help others regardless of their age. You just have to want to give your time and energy to help others – and send in your application on time:). All of the selected teams get to take part in a Via Foundation introductory workshop along with project guidance from Via, a small grant for their event and matching of the funds they raise. Over 1,000 young philanthropists have participated since the program began five years ago.

Thanks to all of our donors and partners for making the 2019 Young Philanthropists program possible!