Oksana Oliinyk is Alumni of the international program ViabilityNet 3.0.  Few years ago she moved with her family from Kiev to small village Khrystanivka and wanted to live actively here as well. Here is inspirational interview with her.

What made you want to engage as a volunteer when you first moved to your village a couple of years ago?

When I moved here, I had a one-year-old baby. In villages, people don’t usually go out with their kids – they stay at home. But I had the big-city habit of going out with my child so I walked around the village and talked to people. A lot of the village children would join me because it was unusual for an adult to go out to have fun and they liked my company. I started to talk to them to see what they thought, how they felt and what they needed. My first project was reading books to children every week in an abandoned school. Before, they could take books home but would either not return them or return them damaged – and more importantly, they didn’t read them. So I decided to read books out loud and introduce the children to the culture of using books. That was my first volunteering project.
Later on, I discovered that this abandoned school was also worthy of attention because it was a very beautiful building. A friend of mine sent me a link to a project to maintain school buildings that were built between 1910 and 1914 in a very particular visual style and we joined this initiative. People from other villages involved in the initiative were invited to visit the school, clean the grounds and talk about the value of the building. That was our first big event for the whole village.

Last year, you participated in the program ViabilityNet 3.0. How would you assess your participation, what did you learn and how are you using the acquired knowledge in practice?

I’ve learned a lot. When I applied for the program, I thought that Via Foundation would just support my cultural initiative. But later on, I discovered it was not about cultural support: it was more about how to talk to people so they can share your values and join your projects, and how to make everyone involved in the project feel like it is their project and not just your project.
It wasn’t easy because we rewrote the project concept several times. Finally, I talked to a team member and described my problem to her. She said, “All right, if you want people to meet regularly, just serve some food.” At first, I didn’t believe it was important to feed people and I didn’t like the idea of spending money on food. But it definitely worked!
Later on, at one of the ViabilityNet meetings, we had a seminar with a facilitator and an expert about approaches to working with the community. I thought she would give me the best and most up-to-date tools. And she said, “The basis of community work is a door-to-door approach.” I thought to myself: really? Do I have to go to every house and talk with every single person in the village? I thought there would be some kind of magic trick to working with people but she said it was the only thing that really worked. So I tried it even though it didn’t seem inspiring and it turned out I liked it.
This changed my point of view about the village and people’s attitude towards my ideas – and it really worked! I’m sure that this is the highest level of expertise about community work that I could get anywhere in the world.

Could you briefly summarise the project that you undertook as part of ViabilityNet 3.0?

The project was called “Stories of the Khrystanivka Musem” and the idea was to collect the oral history of the people who live or used to live in the village to learn about their day-to-day lives. To gather that information, I asked people for their family photos. I scanned, restored and reprinted them and organised regular meetings to discuss the stories connected to the photos. I also had a camera and I walked from house to house and made in-depth interviews with the locals about their lives and the lives of their children, parents and grandparents. Another part of the project was to create a logo design for the village – so now we have a beautiful logo for the museum.
At the end of the project, we organised a neighbourhood festival, with food, drinks and traditional music. We had found old games that kids used to play 50-60 years ago and the adults, grannies and grandpas, came to the festival to teach young children how to play these games. There was also a musician who hadn’t left his house for seven years because he had become blind and he hadn’t felt comfortable around other villagers after that. We persuaded him to come to the festival and play his accordion, which made locals very happy because he played songs from their youth. 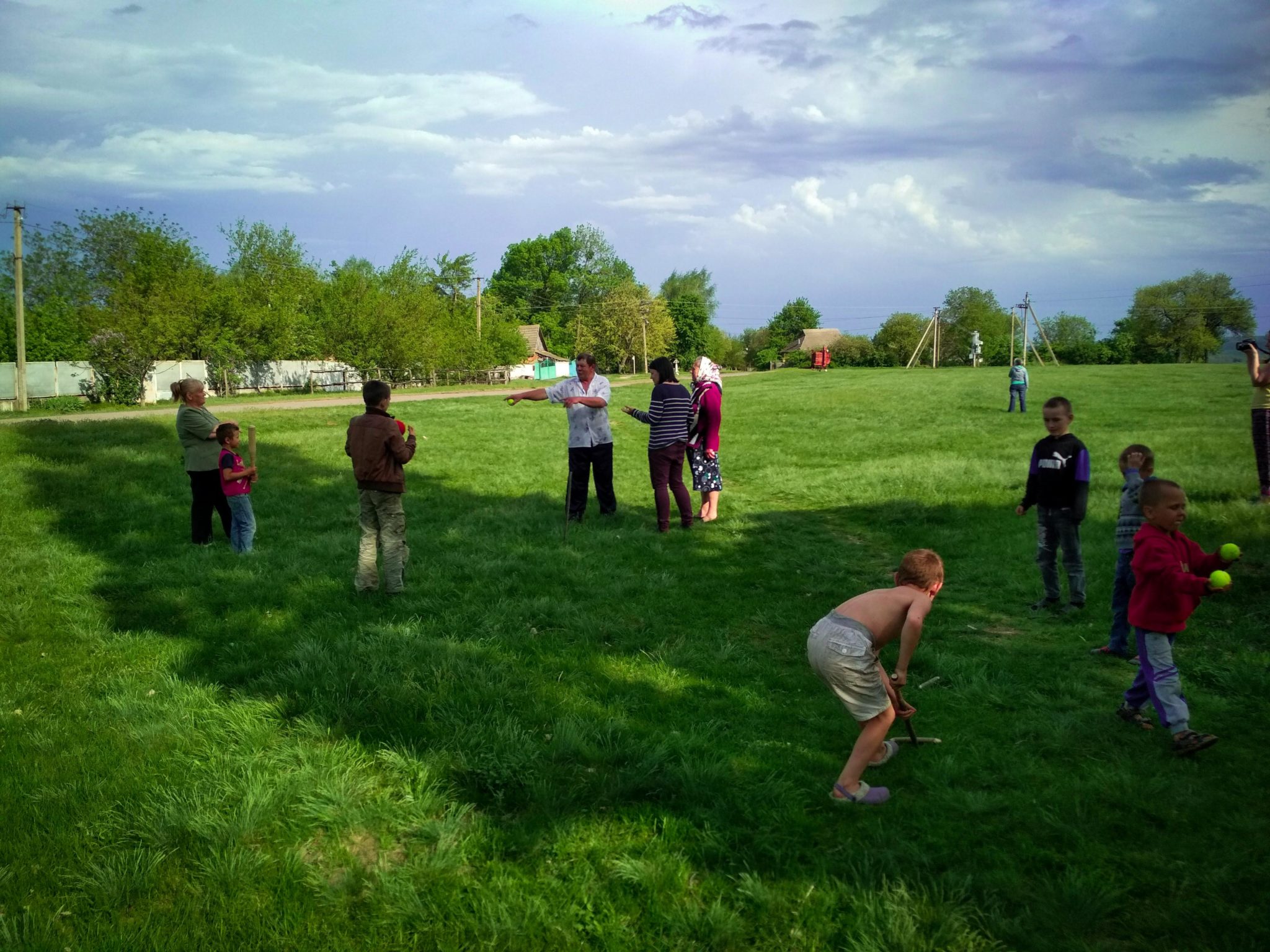 So the project included all these things: photos, interviews, the logo design and the festival.

Did you encounter any difficulties during your project?

I thought the easiest part would be gathering photos and that everybody would love to have them restored. But only one woman came, she brought four photos and told me not to tell anyone. I was really disappointed because I had to scan at least five hundred photos and three months into the project I only had four. Later, I went to another event not related to the project in a nearby town and I met a woman who had been born in our village but had moved away when she was seven. She said she had a lot of family photos from her grandmother but she didn’t know the people in them. There were 50 photos from the 1930s and 1940s, they were really old. I scanned, cleaned and printed them on A4 paper and the result was pretty impressive. I showed these photos to the locals during a meeting and I discovered that they hadn’t understood before what I’d do with the photos, they didn’t know the words “to scan” and “restore”. That’s why they hadn’t brought any. It was really about the words. So I needed this external help to boost the internal process.
In the end, this woman came to the final festival and she was happy to connect with people who were her old neighbours, friends, people that were close to her family. It was a great feeling.
The other big challenge was holding regular meetings. I thought I had to do something big and impressive, find the best, most comfortable and warm place full of light. But then I talked to my mentor and she said, “Forget about the project, it should be fun. You don’t have to sacrifice your time and space and all your effort just to do the project. It won’t work if you don’t have fun.”
Two times a week, a bread truck comes to the village and everyone gathers an hour before it arrives to get their bread, talk and make sure there is enough bread for everyone. And we just used that time and space in the shop to discuss community issues, photos, stories and plans. It was during these spontaneous meetings that we set up everything in the project. Later, there were two big meetings but we organized it all together with locals’ initiative. The solution to this challenge was to relax. I realized that I didn’t have to do everything as planned in the project – just to do it in a way that is easy and effective.

What impacts did your project have on the local community, did you notice any changes?

I’d say the level of happiness in the community rose. Starting in the 1990s, there was a feeling that the village was dying out. The farm, the school and the kindergarten had closed, there was no work and no money. Young people had moved away from the village. There was a general feeling that the village would just die out soon. After the project, the locals started to feel they were alive again.
When I started interviewing the locals, they claimed that nothing important ever happened in this village. They didn’t believe anyone would visit the village because it had nothing interesting or valuable at all. Now, at the end of the project, everybody in the neighbouring villages knows about us and the village is doing better and better. The locals say that they are lucky to live in this beautiful village, that it’s not like other villages, it’s unique and cool. So the project increased the value of the place for people who live here.
The third impact was external. We had great media coverage and I gave about 20 interviews about this project. After this nationwide external interest, the local authorities started to take us more seriously. Today, I had a conversation with one of the members of the local council who said there was going to be a national exhibition of tourist destinations in Ukraine that also involves international partners, travel agencies and so on. So at the end of March, I’ll go to this exhibition to present our village to make increase its visibility and to find contacts and potential to develop the project, also for a wider audience.

What projects or activities are you planning in the future?

This project isn’t finished yet – I haven’t visited all of the homes with my camera and the project will be finished only after all of the inhabitants tell their stories. In some sense, it’s a never-ending process because new stories are happening every day.
This year, I don’t have to do these regular meetings but we still have them – the community is organizing them. Our part is just to provide the space and decide on the time. The villagers bring their own food now and it works – we even have more food than we need. It’s a big success. It’s happening without any plans or external support; it just happens naturally.
With the museum, we gathered the information but didn’t exhibit it in a designated physical space. It’s accessible digitally on Facebook, in the magazines we publish and in our shop. But I do want the museum to be institutionally established in a space that can welcome visitors. This spring, we’ll start developing the museum in a physical space and we will invite tourists so the locals can also earn some money. That is very important – Ukrainian villages like ours (with less than 100 inhabitants) tend to be poor. Most inhabitants are older than 65 and they will be happy to act as guides, prepare food or provide accommodation, etc. We’ll see how successful it will be.

I don’t know if I emphasized enough that the educational part of the ViabilityNet 3.0 program was really important. It enabled us to meet other participants and to see that our stories are similar, that we have the same problems and that they can be overcome in different ways. Every participant has his or her own style of handling these issues. It gave us a great deal of support, expertise and flexibility. It was important to realize the project can be changed – you don’t have to follow the structure but you also need to take in what’s happening around you. That was a great life lesson. Without ViabilityNet, the project would have never worked the same or with the same feeling and effect. The process wasn’t that hard but I see now how much it gave me. I was really happy to be a part of it.