You don’t have to be a politician, a government official or rich to change something in your neighborhood

Lucie, Míša and Olga were dissatisfied with the condition of the playgrounds and a park in their neighborhood in Ústí nad Labem. They submitted a proposal to the municipality for revitalization of these public spaces. Although they met with many disappointments during the process, they confirmed that as citizens they can play a role in changing their environment. They subsequently began organizing cultural and community events in their neighborhood to make it a more vibrant place, strengthen residents’ bond to their community and rebuild local pride in their city.

The first neighborhood issue you took on was a playground reconstruction. What led you to do that?

Lucie: Míša and I have known each other for 15 years. She knew I had experience with grant applications so she asked if I’d help her write a proposal for reconstruction of a local playround to submit to the Citizen participation program here. We visited the playground often with our children and noticed that some things needed to be fixed and also some of the equipment was being used in a hazardous way, so we initiated a little survey among the parents there and preschool teachers to find out what should be changed, and then we sent in an application to have the playground reconstructed. About that time we also connected with Olga, who was already working on an application for a renovation of a park in Vrchlicky sady, so we put the two projects together. And that’s how our group came together. We called it Promyky (“Mongeese”).

Olga: I got interested in public space and the possibility of changing things in the city after I took part in clean-up days, like the nation-wide Let’s Clean Czechia events. That strengthened my connection to my community and my drive to improve it here, in different ways, too. When you start doing something for your environment, you realize that you have bigger ambitions too, a desire to implement other activities for your community. That you want to live in a community that is not only clean and nice-looking, but that also works well. Our neighborhood is quite nice, we have a lot of vegetation, and we’ve evolved into a community people who know one another and get together. Since we can’t rely on our elected officials to improve our city, we feel the need to do something ourselves. Fortunately, right now there are enough residents here who feel the same way. And I think that over the past two years a lot of things have really improved here and that it is inspiring other residents in Ústí nad Labem, even those who aren’t originally from here. 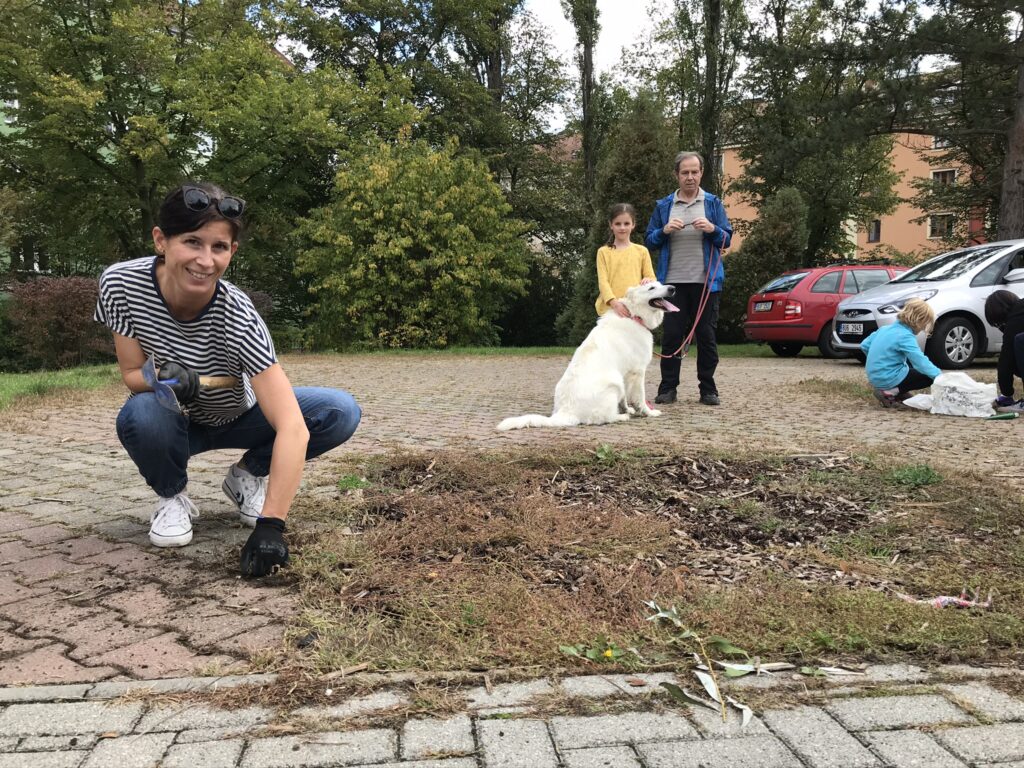 Lucie: It’s like a train that’s already going – you can’t get off. The activities accumulate, people from other districts and cities contact us asking for advice. They want to know how we got started, what we put in the grant applications, etc. So we share all of our experience and that brings results. It’s a way of supporting other people who are trying to get up the courage to go out into the public sphere and do something. It’s great to see another person start to do something for his or her community and see their ideas implemented in real conditions.

Míša: We also try to connect people, associations and help them help each other. We know how to ask for help and love to give help in return. Just as someone inspires us, we try to inspire others. And even though we are not an official association, we’re an informal group, we are capable of raising money, like grants from Via Foundation, money from private companies and individuals. It’s exciting to see that our activities have shown people that as a citizen, you really can change quite a bit in your community – you don’t have to be a politician, a government official or a wealthy individual, to get things moving.

The name of your group, Promyky, (“Mongeese”) caught my eye. I have to admit I had to google it…

Míša: Mongeese are unbelievable animals. They feed on the most poisonous snakes in the world, so in Asia people keep them as household pets to protect children from snakes. There’s one unique characteristic of this animal in nature that fascinates us: if it doesn’t fool the snake with its agility and speed, it gets bitten by the snake, “dies” for a while and then gets up and continues its journey. It’s not completely immune to the venom, but it can handle a certain amount and keep going. We just feel like mongeese: we love children, sometimes we get bitten, we get hurt, but then we wake up and move on.

So is it still the three of you putting events on, or have you formed a community of volunteers?

Olga: We’ve had three major cultural events. There was the spontaneous Advent gathering in the park last year, which was very impromptu, but it got us going. The next one was the Splendour Festival, which took place in September 2020. This was a large event for about 600 visitors, so we took care to ensure that it was run at a professional level. Luckily we have a lot of friends who helped out and also participated with their no-packaging shop, meatloaf and burger stand. At the end of last year, we held our Christmas gathering again, which this year turned into the existing Advent Benefit Fair to support local businesses, makers, and the animal sanctuary, which raised CZK 10,000 for their services. And then we have minor accompanying activities, for example, with volunteer help we made over 130 Christmas gifts for the elderly – a framed picture and message. We also had a pergola installed, for which we raised money from CIF, and the designer Ales Morvay of Morales Aussig donated his work and there were also donations from citizens.