When we opened a call for our Young Philanthropists program in January 2020, we had no idea the projects would take two years to complete. This program, which gives children and young people a chance to try philanthropy and community engagement first-hand by supporting them in organizing charity events and community-building projects, usually takes one year. But covid-19 turned everything upside down. Some of the project teams had to give up their plans when it became clear that they wouldn’t be able to hold events in 2020. But most of them stuck it out and courageously adapted their projects to the changing pandemic conditions.

Here’s an overview of how the Young Philanthropists helped their communities. Most often they organized charity events for other, less unfortunate children, or supported a local non-profit organization, retirement home or an environmental movement.

Český Krumlov
When the first wave of the pandemic eased up in summer 2020, Emilie, Filip and their classmates at the high school in Český Krumlov jumped into action and organized a charity event for a girl with epileptic West syndrome. Their aim was to raise money to help her family buy a car to make it easier to transport her to doctor’s appointments and so forth. Thanks to the students’ charity event, which was a family sports afternoon with live music, a fundraising run, refreshments and games, and an online fundraising drive on Darujme.cz, they were able to give her family almost $7,000 (CZK 150,639). “None of us expected to raise this much money. Seeing the family’s joy when we handed over the check and how grateful they were was unbelievable. It was the most powerful feeling I’ve felt in a long time,” said one of the students.

The team in Hradec Králové, led by Tereza, Helena, and their friends, was able to hold an in-person event, albeit with a one-year delay. They held a children’s game day with a firetruck and demonstration of first aid techniques. The proceeds, which equalled $582 (CZK 12,575), were donated to a local non-profit organization that supports victims of domestic violence and used to buy toys for young clients.

Similarly to the team in Hradec Králové, students at the high school in Benešov chose to support a local non-profit organization. They got the town leadership to rent them the municipal sports facility and help with event promotion so that they could hold a charity soccer tournament. Between the event and their concurrent online fundraising drive, they were able to raise $1,064 (CZK 23,000). They plan on organizing a second annual charity soccer tournament this year. 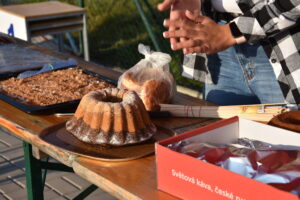 The team in the village of Dolní Žandov took a different approach to adapting to the pandemic restrictions. Instead of waiting for a suitable date, they carried out part of their plans online. They invited the public to collect well-preserved books, which they subsequently sold over the school website and at craft fairs when possible. They also had an online fundraising drive and altogether they were able to raise almost $5,000 (CZK 107,247) for a boy suffering from congenital epidermolysis bullosa. 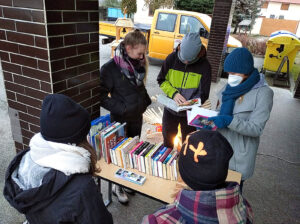 One team of 4 girls – Denisa, Anna, Markéta and Martina – decided to make their charity event entirely online. They held a lecture day over zoom to benefit Focus Praha, an organization which helps mental ill people. They organized a series of lectures about mental health specialists that drew a broad audience, and they were able to raise $1,100 (CZK 23,750) through volunteer donations. 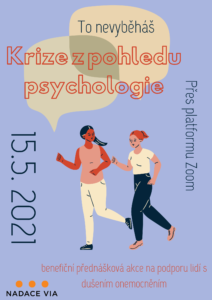 A team of girls from the Medical and Social Services Secondary School in Chrudim had hoped to create and sew heatable pillows together. They weren’t able to carry out this part of their plan and instead had to have the pillows made. However, they were able to sell the pillows, with the help of their classmates. They raised almost $925 (CZK 20,000) for a young disabled girl in need of intensive physical therapy not covered by health insurance. 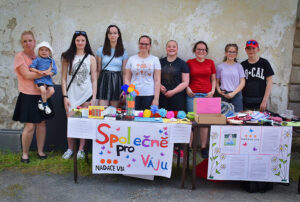 A team of students from Chropyne sold handmade products to support a young girl who had been born prematurely and has to undergo various expensive treatment procedures. The children sold their products at a number of craft fairs and raised $660 (CZK 14,420) to help her.

A team from the city of Ústí nad Labem chose to support children from the local branch of the organization Kangaroo, which helps vulnerable children. Since their plan was to prepare a farm day for the children, they waited for the pandemic to subside before holding their event. In the meantime, they held an online fundraising drive on Darujme.cz and succeeded in engaging a well-known media personality. They raised over $1,150 (CZK 25,000), which will also help fund a vacation for vulnerable children during the summer holidays.

Students from an Ostrava school regularly visit a local retirement home, where they play board games with residents or sing songs. They decided to help the retirement home through a fundraising drive. They had originally wanted to hold a charity run but it was not possible to hold a mass event. Instead, each student ran on his or her own, in his/her free time, and took part in the online fundraising drive. They saved money by not holding an in-person event and were able to donate $275 (CZK 6,000) to the retirement home. 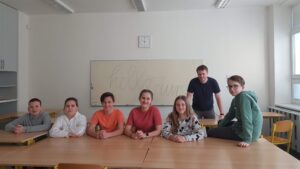 A group of 5 friends from a high school in Týn nad Vltavou chose to support their elderly neighbors. During the summer and autumn, they held several charity sales and second-hand bazaars. Schoolmates donated items for the bazaars. Like most other teams, they also held an online fundraising drive. Altogether, they raised over $1,060 (CZK 23,000). They plan on continuing with these events and also becoming volunteers at the local retirement home.

At an elementary school in the town of Vlašim, children who are active in the school parliament did a recycling outreach project. They held a charity outreach event, where they raised over $1,060 (CZK 23,000) that the school used to buy recycling bins, create flyers about recycling and pay for recycled waste collection.

Young Philanthropists from an elementary school in Kroměříž helped three young children whose mother had died during childbirth. They put on a concert with performances by teachers and students, who acted, danced and sang. To prepare for the event, they painted stage sets and created a picture book that they sold at the event. The students raised $2,010 (CZK 43,500) at the event and like many of the other teams, they enjoyed organizing the charity event so much that they plan on continuing even without Via support.

About the Young Philanthropists program

Over the past 8 years, more than 2,000 children and young people have taken part in the program to help their communities. In 2021, we held a special microgrant program to encourage children and young people to get out after months of online schooling.
.
In 2022, we are holding our regular program of charity events and community engagement projects once again. Read more here.